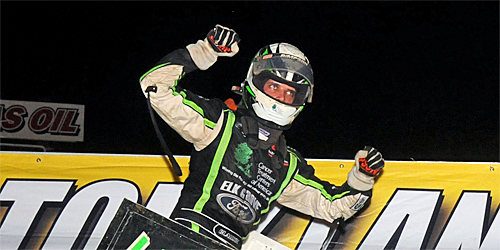 In fact, my first instinct was to pack up my belongings and get on down the road and back to my Tulsa home for a night or two before the Knoxville Nationals. But, driver intros for the Ironman 55 in Pevely, MO, were in progress. I heard interviews with friends starting near the front and then Rico Abreu already expressing concern for what had happened in Kansas.  I knew I had to go back in and see how it unfolded. Bryan Clauson would have been disappointed in me had I not forged ahead. It’s what we do.

Abreu went on to win that race on Saturday night, August 6, battling past “Mad Man” Kerry Madsen in truly fearless Rico fashion in front of packed Pevely house. It was a memorable moment on its own merit with Rico hoisting the Ironman 55 barbell above his head.

As the victory lane festivities wrapped up, Rico immediately asked me of Bryan’s well-being a few hundred miles away in Belleville, KS. I had no answer to offer at the moment. We were already into the waiting mode.

And that apprehension fueled a seven-plus hour overnight drive home with nary a blink of the eye; the mind was consumed.

It was a hectic week that began four nights previous at Fairbury, Nebraska’s Jefferson County Speedway where friend and racer Cody Brewer delved into the promotional side for the first time with a USAC Midget event to kick off the week leading into the storied Belleville Midget Nationals.

First order of business for that Tuesday night was to get caught up with Bryan and “Circular Insanity”. It had become the routine to chat by phone at least once a week to stay up to date on things and keep the masses updated on the chase for 200. This was a rare occasion where his Circular Insanity schedule meshed up with my own personal insanity schedule so that we could catch up in person.

The fact that Bryan and his fiancé Lauren allowed me the opportunity to document his unprecedented pursuit of 200 races was an honor, I felt fortunate to be a small part of it. Like many, I had watched Bryan race for quite a few years and had gotten to know him over time. The Chili Bowl triumph was big, but I can’t imagine anything that topped his miraculous last lap win of the Midget portion of the 2013 Western World Championships at Canyon Speedway Park that netted $20K for the sweep after also winning the Sprint Car feature. There was a reason that CSP came to be commonly referred to as “Clauson Speedway Park”.

Like anyone I work with, I looked forward to our calls. With Bryan, it was not uncommon to have either of the pups Chevy and Stewart have the occasional wild moment or even maybe make a break for it with Lauren to the rescue. It was just real life.

Those phone calls were with what seemed to be a regular guy that also happened to win an inordinate amount of races and, oh yeah, race in the Indy 500 a couple times along the way too. But you wouldn’t know that just talking to him, he never big-timed anyone. Those are calls that I miss already.

Bryan rebounded from early issues to finish fourth on that Fairbury night and then “Parked It” one last time officially the next night in Beloit, KS, at the Chad McDaniel Memorial, though I truly believe he has been there in spirit with many since already, along with extending other lives by being an organ donor. That’s something that really came as little surprise in the aftermath.

After his Thursday run at the Knoxville 360 Nationals that ultimately locked him into the Saturday finale despite a weakening powerplant over the final rounds, Bryan and Lauren headed back to Belleville where he intended to defend his title rather than try the 360 from deep in the field.

Belleville was simply bad from the start. Mechanical issues in his heat put him several rows back in the feature.

And that Friday crash was a hard one as I watched online outside the Knoxville 360 Nationals. But, he popped out right away so I was comfortable texting friends there as we breathed a sigh of relief. Better days ahead we would assume.

At Pevely by Saturday night, as much as I wanted to watch Midgets rip around the I-55 oval, I couldn’t resist the temptation to watch the Belleville Midget Nationals finale online. It’s a race that I love and had watched Bryan win in 2009 and then again last year, but for reasons I can’t truly explain, I opted for the Ironman 55. And with the outcome, I’m glad that’s the direction I chose.

Pulling up Belleville online in the parking lot as Midgets raced at I-55, the early portion of the race at Belleville looked incredible. It had me second-guessing myself. At least for a little while. Thorson out front, Boat into the mix and here comes Bryan. And then Clauson into the lead amidst a three-car duel through traffic. It was beautiful to watch, at least for a while.

And then it all went wrong. So horribly wrong. And in precisely the same spot as the night before. The crash was ugly and the silence from there was painfully deafening.

Ultimately, the worst of fears proved true. Circular Insanity was cut short at 117, though those racing in Bryan’s honor will carry him well beyond the 200 mark.

Knoxville Nationals went on in an overall daze, with the racing community stepping forward to show just how strong it can be in tough times and rallying around surviving friends and family.

Racers all across the land have been “Parking It” in BC’s honor over the past couple of weeks and I suspect it will continue for a while. And that’s a good thing, it’s an ultimate show of respect for one of the greatest racers of any generation. A great racer and an even better person on top of that.

And all of these double rainbows and grasshoppers? Believe what you will, but you just have to wonder. And believe. I witnessed my own double rainbow as Friday’s USAC Southwest “Freedom Tour” card was getting rained out in Wichita, KS. And that was one night after a random grasshopper came out of nowhere to hang out for a couple of minutes before the Creek County features. It could just be coincidence. Or is it?

BC stays with us. #BCForever