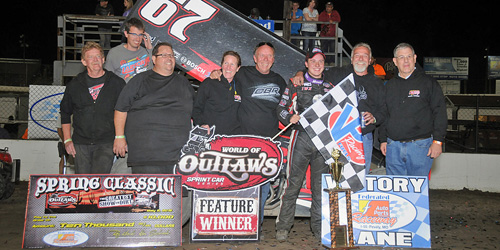 The Wheatley Chronicles – Volume III, No. 41

A World of Outlaws triumph was one thing missing from the list though.

Christopher Bell changed that on Saturday night, besting the World of Outlaws at Pevely’s Federated Auto Parts I-55 Raceway to give the Speedway Motors-powered Keith Kunz Motorsports No. 67 J&J an Outlaw triumph in just its second outing of the season.

“I’m pumped, I don’t know if I’ve ever been this happy, I just beat the Outlaws,” the jubilant 20-year-old from Norman, OK, exclaimed after the triumph.

And it wasn’t his first, as he scored his first World of Outlaws win in May of 2014 at Jacksonville Speedway in Illinois.

This time, he did it with Keith Kunz and Pete Willoughby, the duo for whom he has piloted Midgets over the past couple of seasons.

And with just a half dozen Winged Sprint Car starts last year to go along with a random winged weekend back in 1999 for the Kunz team, it didn’t take long for the dynamic grouping to reach victory lane.

Bell’s Pevely triumph was a hard-earned one, with Bell chasing down early leader Kerry Madsen on the 15th round and then fighting off a Sammy Swindell challenge past the midway point to take the win. A talented duo with Pevely creds as well, as Madsen won last year’s Iron Man 55 at Pevely while Swindell was the reigning champion of the Spring event at I-55.

“I knew probably about ten laps in that I could get the lead, just didn’t know if I could hold it,” Bell commented. “I didn’t know who would come on late.”

After disposing of Madsen for the lead, Bell’s first challenger was Swindell after a mid-race caution. Swindell raced into the lead, only to have Bell battle back in front three laps later.

“He made me get my elbows up,” Bell explained.

Bell slipped away soon after, leaving Swindell and Jason Sides to battle it out for second. And with traffic in play, Sides and Swindell were closing the gap on Bell as the laps wound down until a final caution with just two laps to go denied a potential Sides sneak attack.

“Those last two laps, I told myself I was either gonna win or crash trying,” Bell explained.

There was no crash and Bell solidly put away his second career World of Outlaws triumph and the first for car owner Kunz.

Sides fought off Swindell and more challengers over the final pair circuits to secure runner-up honors. “It was pretty crazy, I don’t even remember half of the stuff that went on with Sammy, it was wild,” Sides commented.

Up to sixth from his 18th starting position by the time the final caution flew with two laps to go, Joey Saldana gained three late positions to capture third with Daryn Pittman and Swindell rounding out the top five.

Scheduled to start from the pole position after winning the Dash, Rico Abreu’s mount never fired for the “A” Main due to mechanical problems, reducing the reigning Chili Bowl champ to role of spectator.

Quick Time: A new track record opened the night as tenth out among the field of 33, Kraig Kinser set his first quick time of the year with a lap of 10.891 seconds to shatter the previous record of 11.177 set by Craig Dollansky in April of 2013.

“B” Main Moments: Hunter Schuerenberg rallied from 13th to third in the opening pair of rounds before going on to win the “B” Main after early leader Brian Brown slipped too high getting into turn three on the ninth lap and went for a wild ride; Steve Kinser led the opening round before looping it in front of the field in turn two for the first caution; Brady Bacon clipped a spinning Kinser and retired pitside a couple of laps later with front end woes; Joey Moughan came to a stop against the frontstretch wall after five laps following contact from Kinser, who was charging back through the field; Kinser was challenging for the final transfer only to bobble again in turn two in the closing rounds; A.J. Bruns rode the high line to take the fourth and final transfer away from Jacob Allen in the final corner; Allen caught a break and was added to the feature as the last alternate when Bill Balog scratched from the feature after breaking in the Dash.

Lap 20 – A David Gravel spin on the frontstretch creates a mid-race breather as Bill Rose pulls to the infield.

Lap 38 – Paul McMahan goes up in smoke to create a green-white-checker just as Sides and Swindell were closing in on Bell for the lead.

“A” Main Hard Charger: Joey Saldana gained 15 positions by rallying from 18th to round out the podium in third.

Note: Jacob Allen started the feature as the first alternate after scheduled eighth-starter Bill Balog was unable to make the call.