Blaney Back in All Star Victory Lane 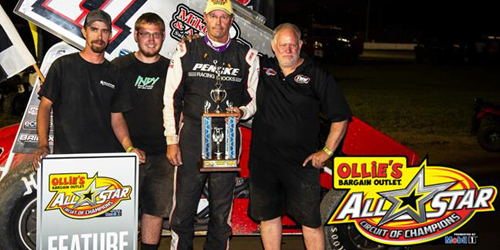 Piloting the Sam McGhee Motorsports-owned No. 11, Blaney was under immense pressure during his 30-lap trip to Stateline Speedway victory lane, first forced to deal with NASCAR Hall of Famer, Tony Stewart, then defending All Star champion and current Series point leader, Aaron Reutzel. To top things off, Blaney was also forced to end the program with an infamous green-white-checkered restart, ultimately persevering, crossing under the final checkers with Reutzel and Stewart in tow.

“It kinda sucks to have that happen, especially when the finish is that close,” Dale Blaney said, a six-time All Star champion and National Sprint Car Hall of Famer. “Regardless, it all worked out for us in the end…”