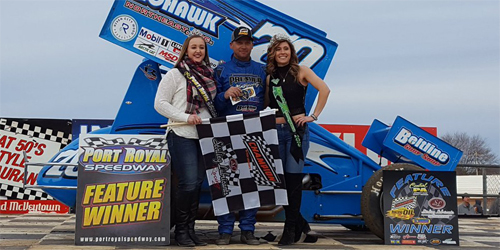 To get his fourth career win at Port Royal worth $3,600, “The Buckeye Bullet,” Dave Blaney had to drive by Greg Hodnett and then out-gun Lucas Wolfe to the checkers.

Hodnett started second in the 25-lap 410 sprint car main with Blaney taking the green from the third position and Wolfe in 10th.

The caution appeared early in the event, with two laps scored when Parker Price-Miller spun high in the fourth turn and collected Jason Shultz and Joe Kata.

Hodnett held command for the restart with Kody Lehman and Blaney following.

Blaney snagged second from Lehman at the new green and then stuck with Hodnett, not allowing him to “check out” as the race entered the rear of the field with eight laps away.

Racing through traffic, Blaney was able to narrow Hodnett’s advantage before the second caution flag of the race unfurled with 11 laps to go for a spin by Aaron Reutzel who was up to sixth after starting the race in 14th.

Blaney blasted across the bottom and middle of the first corner on the restart to drive by Hodnett and take command of the event while Lucas Wolfe restarted third.

Wolfe was working well on both sides of the track and overtook Hodnett for second with nine laps to go.

Blaney then raced to stay ahead of Wolfe as he came up on the rear of the field during the final five laps but Wolfe was clearly closing as the two-to-go sign came out.

Wolfe had just one shot to steal the win and it came with a deep, third turn dive and swoop to come up off the bottom in the fourth turn with the lead, just in front of Blaney.

But Blaney turned the car down off of the cushion as the pair raced out of the fourth turn and drew back to Wolfe’s inside as they sped toward the checkers, mustering just enough power to retake command as the finish line neared, posting a .312 second margin of victory.