Boespflug to the Mean Green 69 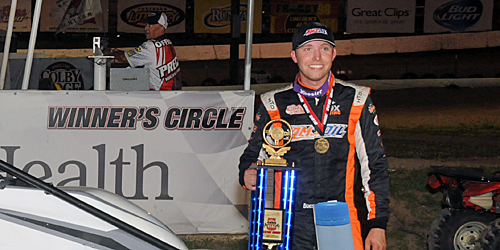 Staying the same are the return of our major sponsor, Mean Green Cleaner & Degreaser, associate sponsors Lykins Energy Solutions, XYZ, and the addition of EZR. HAR remains an Official Military Order of The Purple Heart Race Team. What is changing? Of the five “core Team members” of HAR, only Richard Hoffman and Tim Waechter are remaining.

Dan Launderville is moving on to a business opportunity, Rob Hoffman is retiring, after a lifetime of racing, to concentrate on family and his business career in banking. Brady will not be able to run the entire schedule due to other racing conflicts and will concentrate on wing sprint cars.

“The loss of Dan, Rob and Brady necessitated a restructuring of the Team. I want to wish Dan, Brady, and my son, Rob, the best. We had one heck of a Team, as evidenced by results. Without the backing of Mean Green, Lykins, XYZ, Hoosier Tire, and now EZR, it would have been difficult to continue. As it is we are excited to carry on our legacy with Chad.

He will drive the 69 car. Chad’s career is taking off and with the addition of Davey Jones as the crew chief, that makes us a threat every night, and for our 12th USAC National Sprint Car Championship,” said Richard Hoffman, President of Hoffman Racing. The Team will be headquartered out of Indianapolis, Indiana.

Chad Boespflug commented “I am looking forward to working with Dynamics Inc. Hoffman Racing. With the help of EZR we will be chasing another championship in 2017. It’s a tall feat to follow in the footsteps of their accomplishments over the years, but also a huge honor to help carry on the Hoffman Racing legacy of excellence and championship. They truly helped evolve the sport of racing.”

Chad began racing micros in 1998 in his home state of California. He graduated to sprint cars in 2004. He won the SCRA championship in 2005 and made the big move to Indiana in 2007. He became the Lawrenceburg track champion in 2011. Chad began his own team with the help of Chuck Eberhardt and Fred Zirzow and ran the entire USAC National Sprint Car schedule. They racked up 6 USAC National wins in 2016.

“Mean Green is America’s #1 heavy duty, all purpose cleaner and degreaser that provides consumers with the toughest clean at a great value. Independent lab tests prove that Mean Green out cleans other
brands on the tough grease and grime. It works better because it contains more cleaning ingredients than other brands. It’s the Toughness you can Trust, for when getting it clean matters most. Great for dirty jobs inside and out, from the kitchen countertop, tile and toilet, to outdoor furniture, greasy grills and engine parts. Visit www.MeanGreenDegreaser.com for more information.

Highlights of Hoffman Auto Racing’s (HAR) history include: 1929-1960 – Gus campaigned Sprint Cars and Midgets. His drivers included Eddie Sachs and Don Branson. 1964 – Gus’s son, Richard, became co-owner of the Team. 1973-1984 – HAR fielded Indy Cars, including 7 Indy 500 starts. 1989 – HAR won the first of 11 USAC National Sprint Car Championships with Rob Hoffman as the crew chief (’92,’93,’96,’97,’99,’02,’04,’08,’14,’16). With 100 USAC National Sprint Car wins and 11 National Championships, HAR has won more National races and championships than any other team in USAC sprint car history. HAR also has 7 Silver Crown wins and one USAC midget win, for a total of 108 USAC National wins. In 2003 HAR was recognized for excellence by the Ohio State Senate and House of Representatives. HAR has finished in the top 3 in USAC National Sprint Car owner’s points 20 times since 1989.