Brown in Opening Round of Spring Meltdown 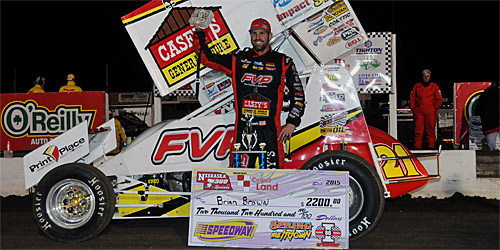 The Wheatley Chronicles – Volume III, No. 23

Lonnie Wheatley, GREENWOOD, Neb. (April 3, 2015) –There was nothing easy about this one, as Brian Brown ultimately came away with the $2,200 winner’s share in Friday night’s 25-lap Spring Meltdown opener at I-80 Speedway.

“Blackjack” finally wrestled the lead away from fellow Knoxville contender Jon Agan with just a handful of laps to go to secure the Nebraska 360 Sprint Series win atop the 4/10-mile in the FVP/Casey’s General Stores/Printplace No. 21 Maxim.

“There was a couple of close calls along the way, he definitely raced me hard,” Brown said after the triumph.

At a track where Brown was a frequent victory lane visitor as late as 2011 when he topped three of four features, it marked his first I-80 score in nearly three years since his last triumph on April 7, 2012.

After a dominant heat race win among the 40-car field, Brown gridded the feature field outside the fourth row with a pair of No. 4 cars (Jason Danley and Agan) leading the way to the green flag.

Brown wasted no time when the green flag flew, charging to third on the opening round and then taking second from Wade Nygaard the second time around.

Brown went to work on Agan in short order but Agan was up for the fight. The duo battled for the point, very nearly rubbing wheels on at least a pair of occasions, with Agan fending off the No. 21 until the slightest of hesitations amidst traffic entering turn one on the 20th round opened the door for Brown.

Brown took advantage by sliding into the lead and then after a caution that kept him out front with just five laps to go, kept Agan and company at bay the rest of the way.

With Brown in control over the closing circuits, the battle for second turned into a three-way duel for position among Agan, Danny Lasoski and Ian Madsen.

Lasoski, who rallied from the 18th starting position to fifth in the opening ten rounds, broke away from a three-way duel with Clint Garner and Nygaard only to engage in another three-way with Agan and I. Madsen.

Lasoski snared the runner-up position on the white flag lap with Agan holding on for show honors when Madsen rode the turn three and four retaining wall on the final circuit. Madsen held on for fourth just ahead of Josh Baughman, who advanced from 11th with Billy Alley racing from 20th to sixth.

Heat Moments: Sporting a vintage Natalie Sather top wing, Don Droud, Jr., rallied from seventh to third on the first lap of the night’s first heat and into second on the second round before taking the win from Texas shoe Josh Baughman on the final round. The most intense heat race laps of the night were the first three rounds of the third heat with front row starters Ian Madsen and Jack Dover going wheel-to-wheel with several crossovers along the way. Dover ultimately took command, though “Brother of Mad Man” made one last ditch charge in the final pair of corners that Dancin’ Jack fought off.

“B” Main Moments: After Jordan Boston won the first “B” in his first night aboard the No. 82 driven in the past by heat five winner Danley, Jamie Ball made a late run to take the second and final transfer in the second “B” behind race winner Cody Ledger.

Lap 10 – Fifth-running Jack Dover comes to a stop after popping a powerplant.

Lap 20 – A caution flies for Thomas Kennedy’s turn two spin with lap 20 logged into the books though the leaders were racing off turn four when the caution flag flew. Agan held the advantage upon the completion of lap 19 but Brown led the way on the restart.

Lap 22 – Clint Garner spins to a stop in turn four and gets the hook back to the pit area.

“A” Main Hard Charger: Hard Chargers aplenty on the racy 4/10-mile clay oval with Danny Lasoski best of the bunch by advancing a total of 16 positions from 18th to second.