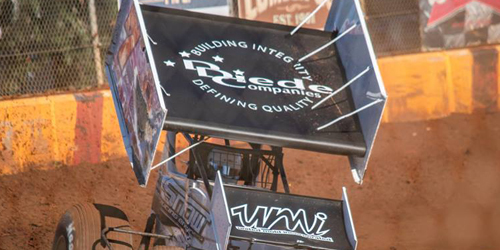 Lonnie Wheatley, EL PASO, Texas (July 26, 2018) – Coming off a pair of Speedweeks, John Carney II will kick off a busy stretch of action in Iowa this weekend with the Clayton Snow No. 7 Sprint Car team.

The team will pull double duty at Knoxville Raceway on Saturday night, taking in the winged 410-ci All Star Circuit of Champions portion of the event along with the weekly winged 360-ci Sprint Car card.

From there, Carney and the Snow No. 7 team will shift to Mason City Motor Speedway for ASCS National Tour competition on Sunday night before taking in the Knoxville 360 Nationals on August 2-4, the Capitani Classic at Knoxville on August 5, Oskaloosa events and then his first run at the prestigious Knoxville Nationals on August 8-11.

A Friday night Nebraska 360 Sprint Car Series outing at Greenwood, Nebraska’s I-80 Speedway is tentatively on this weekend’s slate as well.

“There are a lot of big races coming up and I’m looking forward to it,” Carney commented.  “We’ve been running well, so hopefully we can continue that over these next several weekends.”

Carney just completed the Western Sprint Tour’s “Speedweek Northwest” with a second-place finish in points after racing to a podium finish in four of five events.  Prior to that, Carney earned a seventh-place overall finish aboard his own No. J2 entry during the Lucas Oil ASCS National Tour’s “Sizzlin’ Summer Speedweek”.

Set for a busy second-half of the season that will include much of the ASCS National Tour slate, Carney has already captured four feature wins this season with his most recent score an ASCS Southwest triumph at Las Cruces’ Southern New Mexico Speedway on May 26.

Keep Track:  Keep track of John Carney II’s on-track action including schedule and results at https://www.johncarneyracing.com/ and on Facebook at https://www.facebook.com/JohnCarneyRacing/.