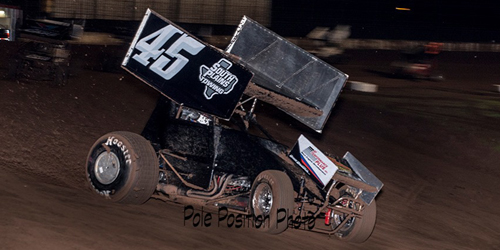 While it will be Carney’s first trip to the 3/8-mile clay oval, the driver of the Sander Construction/South Plains Auto Transport/Mesilla Valley Transportation No. J2 Sprint Car has seen video of the oval.

“It looks like it gets slick through the center and there’s a top and a bottom,” Carney says.  “It looks like there should be two lanes of racing, so it should be good.”

Carney climbed to fourth in series points following the trip to Pennsylvania two weekend ago where only a Selinsgrove heat race was completed before rains washed out the feature.  The entire Friday card at Williams Grove Speedway fell victim to rain as well.

“We didn’t decide to go until Saturday morning,” Carney relates.

Carney piloted the No. 45 South Plains Transport Sprint Car for the evening.

“With their left rear tire rule and the wings flattened out, we were originally just going to run the 305,” Carney explains.  “But when we got there and saw heavy the track was, we dropped a 360 in it instead.”

Pacing the early laps of the feature, Carney slipped back to fifth after a wheelie but was able to work his way back towards the front to capture the win.

“It’s not a bad way to start the year,” Carney said after just his fourth full night of competition amidst a multitude of rainouts.  “We worked on some things on the car, some shocks and stuff to keep it a little simpler.”

Carney will try to transfer that success to ASCS National Tour action this weekend in Michigan.

Next Up: Lucas Oil ASCS National Tour at I-96 Speedway (Lake Odessa, MI) on Friday and Saturday.