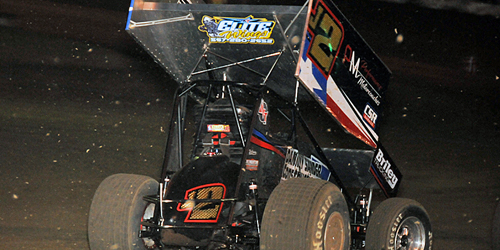 The event atop the ¼-mile clay oval takes place over the course of two nights on Friday and Saturday.

It marks Carney’s second visit to the cozy Creek County confines after posting a 12th-place run in June aboard his No. J2 entry en route to top ten finish in ASCS Speedweek points.

It is Carney’s first action since kicking off the month of October with a strong run at I-30 Speedway’s prestigious Short Track Nationals in Little Rock, AR.

Carney’s STN weekend resulted in his first time to race into the Saturday night championship feature event on October 6.

“It was pretty good actually,” Carney said of the Little Rock weekend.  “I felt like we had good speed all weekend, it’s good to be able to make that show.”

Carney kicked off the weekend in contention for a heat race win on Friday night before an incident sent him to the tail.  Carney bounced back to finish fifth but was still relegated to “C” Main action.

“I made one little mistake and that set us back,” Carney explains.

Carney raced to a convincing “C” Main win and then rallied through his “B” Main from 12th to finish sixth, just three positions short of a transfer.

Carney opened Saturday’s STN championship night with a heat race win and then posted a fifth-place qualifying race finish.  Carney then raced his way into his first STN championship feature with an aggressive move midway through “B” Main competition that secured a second-place transfer position.

“It was a good weekend, no complaints,” Carney concludes.

Carney will be looking for victory lane with the Lucas Oil ASCS National Tour at this weekend’s “Fall Fling”.

Next Up: Lucas Oil ASCS National Tour at Creek County Speedway’s “Fall Fling” near Sapulpa, OK, on Friday and Saturday.

Keep Track:  Keep track of John Carney II’s on-track action including schedule and results at https://www.johncarneyracing.com/ and on Facebook at https://www.facebook.com/JohnCarneyRacing/.