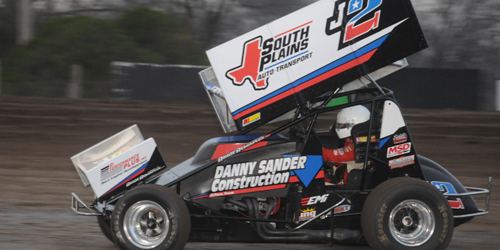 The two-day tilt atop the high-banked, ¼-mile clay oval takes place on Friday and Saturday.

The driver currently sitting sixth in Lucas Oil ASCS National Tour points is gunning for a second consecutive STN championship feature start after a 13th-place run among last year’s field of 74.  And he’s looking for a finish near the front this year aboard the Sander Construction/South Plains Auto Transport/Mesilla Valley Transportation No. J2 Sprint Car.

“We have a good car and we’ve been going really well this year,” Carney says.  “If things fall into place, we can be right there with a chance to win this one.”

The track was pretty heavy in the heats and qualifiers, so it really limited passing,” Carney said of the Thursday portion of the three-night event.  “We got pinched down and turned around in the heat and that pretty much killed that night.”

“Friday was better, but our Thursday points had us buried for Saturday,” Carney says.

“Saturday was kind of the same, it was greasy in the qualifier and I hiked up, snapped the car and hit the cushion and the wall,” Carney says.

Buried in a “B” Main, Carney made a charge only to be derailed.

“We were rolling up there and then overheated our car,” Carney comments.

The weekend ended a stretch of three consecutive feature wins.

Carney looks to renew that winning streak this weekend in Little Rock.

Next Up: 32nd Annual Short Track Nationals at I-30 Speedway (Little Rock, AR) on Friday and Saturday.