Change of Plans Pays for Bacon 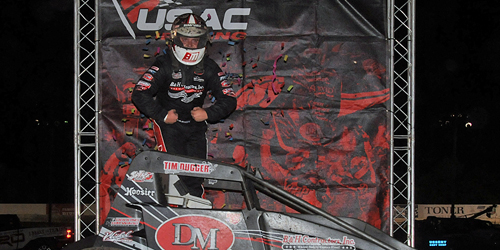 The Wheatley Chronicles – Volume V, No. 34

But a trying Kings Royal weekend in the winged Sprint Car sent Bacon in search of USAC Sprint Car loot and it paid off to the tune of a $5,000 triumph on Saturday night atop the ½-mile Lakeside Speedway clay oval.

“We had some mishaps with the winged car, so we decided last minute to come here instead,” Bacon said in victory lane.  “I’m glad we did, it paid off.”

Bacon had seen Lakeside victory lane before, as he posted a pair of Sprint Bandit TNT wins upon the Kansas clay in 2008 and 2009.

“That was some vintage Lakeside there,” Bacon said upon climbing out of the Dooling Machine/B&H Contractors No. 63 Sprint Car.  “It didn’t look like it was going to be that way in hot laps but I guess the water kept pumping up through the track.”

This one, Bacon led all the way from the pole position with several chasers throughout the 30-lapper.  Robert Ballou, who has claimed his share of Lakeside hardware in past years, ran second early before Warsaw, Missouri upstart Riley Kreisel raced by to take the position just seven laps into the race after qualifying fourth earlier in the night.

Kreisel looked to follow in the path of another Warsaw native known as “The Rocket” to most, as Jesse Hockett first gained notoriety by winning a pair of big wingless Lakeside extravaganzas when he was little known.

Kreisel’s dream run didn’t have the same outcome though, as Justin Grant rallied past for second by the 12th round and then Kreisel got just enough of the wall to cause race-ending right front damage that precipitated the race’s first caution after 17 laps.

Bacon kept Grant and Ballou at bay on the restart and slipped away in the closing laps to nearly a half straightaway as the white flag flew.  But before Bacon could make the final half-mile to the checkered flag, the red lights flickered on when Ballou went for a wild ride in turn one while challenging Grant for second.

After Ballou walked away without injury, Bacon slipped away once again on the green-white-checkered restart to secure the win.

“I was a little concerned because I wasn’t sure if there might be someone railing the topside better than I was,” Bacon said.

He had no worries, crossing the stripe ahead of Grant with Chris Windom rounding out the podium in third.  New track record holder Chase Stockon was fourth while Tyler Courtney battled past C.J. Leary in the final two laps to round out the top five.

Qualifying Moments:  The first car out, Chase Stockon established a new track record while Grant was second-quick with a later qualifying effort; Warsaw’s Riley Kreisel broke up an all USAC top-twelve (in one considers Hodges at least a part-time USAC-er) by clocking in fourth quick the first time in new mount; Mike Sosebee was unable to get his mount to fire for qualifying; Chris Morgan exited the track early in hot laps and was a no-show for timing.

Heat Moments:  The invert of six made for front rows that resulted in some tense starts, but trouble was avoided with heats running off caution free; Kevin Thomas, Jr., checked out in the first heat while Stockon made a big slide past “Sunshine” Tyler Courtney for second in the closing laps; Grant rallied from sixth for an easy win in heat two; If anyone had forgotten that Robert Ballou is kinda good at Lakeside, he reminded in heat three by going upper-upper top shelf in the opening pair of corners to gobble up four cars and then disposed of Hodges next time around en route to a dominant win; In his wake, Hodges, Bacon and Windom mixed it up in an entertaining duel from which Bacon prevailed with the position.

“B” Main Winner (starting position in parentheses):  Not on this night.

17 Laps – Riley Kreisel limps with a broken right front resulting from contact with the wall while running third.  He was done for the night.

28 Laps – With the white flag in the air, Robert Ballou takes  a tumble getting into turn one.

“A” Main Hard Charger:  Chris Windom picked up the honors by racing from ninth to capture the show position.