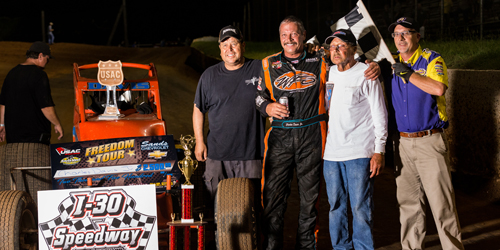 The Wheatley Chronicles – Volume V, No. 36

Buckeye, Arizona’s “Chargin’ Charles” assumed the point when race leader R.J. Johnson looped it in turn four with the white flag in sight and then survived a green-white-checkered challenge from hometown hotshoe Tim Crawley to take the $2,500 triumph in the series first visit to Little Rock.

“That was fun, this is one racy little joint,” the multi-time Arizona champ exclaimed as he climbed from the Massey Motorsports No. 50 RSS Industries/Rod End Supply entry after his third career “Freedom Tour” triumph in the opening leg of the Fifth Annual mini-series.

With Davis, Jr., gridding the field outside the third row after earning the evening’s top passing point total through heat race action, the Oklahoma duo of Casey Wills and Danny Smith led the feature field to the green flag with Wills crossing the stripe first after the opening circuit before Smith paced the next two rounds.

Defending series champ R.J. Johnson of Phoenix, AZ, was on the move though aboard the Michaels No. 77m machine, racing into the lead on the fourth round.  Johnson set the pace with a wild battle for position in his wake until the race’s first caution flew after 14 rounds for a Kevin Hinkle spin in turn four.

Action resumed with Johnson again leading the way as the battle for second narrowed down to the trio of Davis, Jr., seventh-starter Crawley and tenth-starter Dennis Gile in the closing rounds.

Opportunity presented itself to Davis, Jr., though when Johnson spun exiting turn four with the white flag in sight, setting up a two-lap dash to the stripe with Davis, Jr., in command ahead of Crawley and Gile.

Davis, Jr., fought off a Crawley bid and raced down the backstretch less than a half-lap away from the checkered flag when a turn one skirmish between Danny Smith and Howard Moore precipitated one final caution that set up a green-white-checkered run to the stripe.

Crawley made another bid to take the win aboard Mike Ward’s No. 88 but fell short, with Davis, Jr., taking the Freedom Tour checkered flag.  Crawley and Gile slid back and forth in the final pair of corners with Crawley earning the position as Arizona’s Gile settled for runner-up honors.

Arizona’s Tye Mihocko worked his way forward from ninth to capture fourth with Owasso, Oklahoma’s Dustin Morgan charging through the field from 15th to round out the top five after winning the “B” Main.  Little Rock’s Cody Gardner was sixth with Wills, Kyle Clark, Memphis rep Anthony Nicholson and Yuma’s Mike Martin completing the top ten.