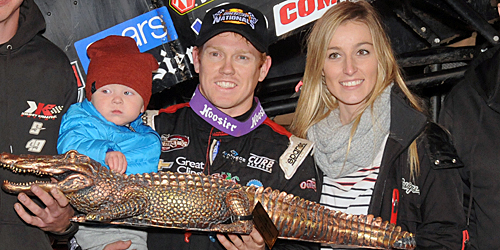 BARBERVILLE, Fla. (February 15, 2017) – The pursuit of the ‘Big Gator’.  It all begins tonight with the first of five nights of DIRTcar Nationals competition at Volusia Speedway Park.

The All Star Circuit of Champions open the week’s festivities with cards tonight and Thursday with the World of Outlaws then taking center stage with the series opening three events of the season on Friday, Saturday and Sunday.

The ‘Big Gator’ goes to the top overall points earner over the five nights of competition.

Cali native Brad Sweet enters the week as the reigning DIRTcar Nationals champion after winning two of the three World of Outlaws events during last year’s action atop the fast, ½-mile Volusia clay.

While Sweet took two of three in last year’s WoO action, Donny Schatz captured the other Outlaw win and the second All Star win after Dave Blaney took the week’s opener.  Last year’s action offered up an average of 30 car per night, a number that will likely rise with this year’s All Star events carrying championship point implications.

The All Stars opened the 2017 season with a trio of events last weekend at Ocala’s Bubba Raceway Park, where Donny Schatz broke out of the gates quickly with a pair of wins before Kerry Madsen denied the sweep with a Saturday night win.

Each night of action is set to get going with hot laps at 6:00 p.m. EST followed by Qualifying and then racing at 7:30 p.m. EST.

For those unable to take in the action in person, http://www.dirtvision.com/home.php has you covered with PPV coverage of each night.