Courtney Counters for I-80 Glory 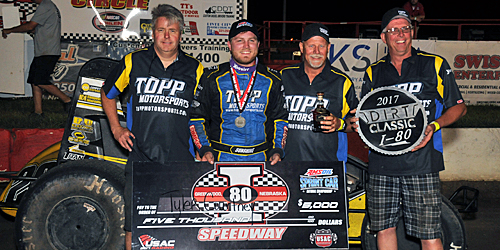 The Wheatley Chronicles – Volume V, No. 22

“Sunshine” was having none of it though, countering each of “Big Daddy’s” sliders to capture his first USAC Sprint Car triumph of the season aboard the Topp Motorsports No. 23

Courtney officially led the final 11 rounds after Windom paced the field for 19 circuits, though the duo swapped the point three times over the final two laps.

And if past history is any indicator, it could bode well for Courtney’s title hopes.  At least at some point if not this year.

While it was USAC’s debut at I-80, the best of the non-wingers had tackled the Nebraska oval in past years with the now past-tense Sprint Bandits Tour ‘N Topless series that ultimately pulled the plug after the 2010 campaign.

Four of five TNT winners at I-80 captured USAC Sprint Car titles, either before or after Nebraska glory.

Levi Jones, now officiating with USAC, scored the first TNT win at I-80 in 2005.  He went on to capture the first of a handful of USAC crowns that season.

Robert Ballou burst onto the “traditional” scene in the 2006 edition, even if his parents weren’t aware of it at the time.  It turned the young Cali native down the wingless path, a decision that has paid off for him with the 2015 USAC title and has paid off for the fans as well as the “Madman” ranks among a select few that is typically worth the price of admission on his own.

Friday’s USAC debut attracted a healthy 27-car field on the way to Knoxville including the regular cast of contenders along with leading USAC/CRA contender Brody Roa and USAC Southwest challenger Bruce St. James among the unexpected.

With Arizona’s Stevie Sussex establishing the night’s quick time aboard the Dutcher mount and then Courtney, Windom and Ballou setting the stage for the feature with heat race wins, Chad Boespflug and Windom led the way to the green flag in the 30-lap feature event.

While Windom jumped out front at the outset, Courtney worked his way from seventh to fourth in short order behind Windom, Sussex and Justin Grant.

And just as a Sussex bobble opened the door for Grant and Courtney to blast by on the tenth lap, the race’s first caution negated the move and put Sussex back on Windom’s tailtank.

Courtney got up in the seat on the restart and raced past both Grant and Sussex over the next two laps to take over second.  He set his sights on Windom, staying within a handful of car-lengths until pouncing on the lead on the 20th round.

Windom wasn’t done though.  He closed back in as one more caution flew with six laps to go.

Shadowing Courtney as the closing laps clicked off, Windom erased the minimal gap and threw a big slider on Courtney entering turn one on the white-flag lap aboard the Baldwin Brothers No. 5.

Courtney crossed back under to deny the move with the entire scenario repeated the next time around on the way to the checkered flag.

Windom made one last-gasp effort in the final pair of corners, throwing the orange No. 5 across the track.  He couldn’t make it stick though, as Courtney once again crossed back under to flash underneath the checkered flag first.

Windom settled for second with Grant rounding out the podium while Ballou earned Hard Charger honors by rallying from 12th to capture fourth.  Cali shoe Roa rounded out the top five as a narrow and treacherous cushion in three and four pulled Sussex back to seventh behind Bacon.

“B” Main Moments:  It was all “The Throttle” in a B Main only interrupted by last-lap spin in turn two by Rob Sharits that set up a green and white together finish.

9 Laps – A caution flies for Chase Stockon, who was fighting for a top-five position.

24 Laps – A turn two spin by Corey Smith sets up a six-lap dash to the stripe.

“A” Main Hard Charger:  Ballou rallies from 12th to earn a fourth-place finish.