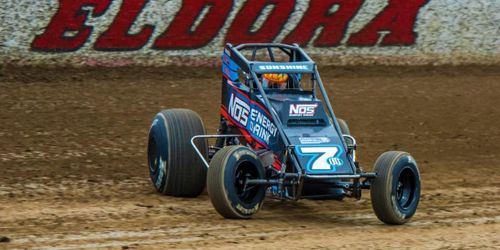 Over the past two seasons, Tyler Courtney has experienced the feeling of winning in all three of USAC’s National divisions at Eldora Speedway.

Perhaps none of those performances were as impressive as the one the Indianapolis, Ind. driver turned in during Friday’s Don Branson/Jud Larson Classic, night one of the USAC AMSOIL Sprint Car National Championship portion of #LetsRaceTwo.

Courtney didn’t bat an eye having to start from the inside of row four, charging to the front of the field in rapid-fire succession to the point by lap six with a turn one slider on Kevin Thomas, Jr.  From there, Courtney staged a disappearing act from everyone second on back, winning by a whopping 8.704 seconds and lapping up to seventh place.

“We kind of got behind the eight-ball starting seventh there,” Courtney explained.  “You’ve got to get your way to the front early and we were fortunate enough to have a really good car…”