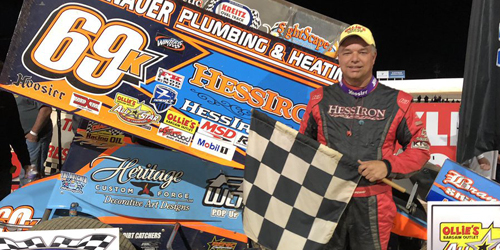 If there is one thing for certain in the world of sprint car competition, one can never count out Lance Dewease at Port Royal Speedway, especially when the Ollie’s Bargain Outlet All Star Circuit of Champions presented by Mobil 1 are in town.

With a little bit of luck in the form of a late-race caution, Dewease, driver of the familiar Schannauer Plumbing and Heating/Hess Iron/Kreitz Oval Track Parts/No. 69K, muscled his way around race-long leader, Danny Dietrich, to earn a Series-leading tenth Port Royal Speedway victory during All Star action, climbing his way forward from the outside of row four. Impressive enough, Dewease has won seven of the last eight All Star contests at the Port Royal ‘Speed Palace,’ raising his overall win total with the Tony Stewart-owned organization to 38.

“I grew up racing at this place. I’ve raced here 30-plus years now,” Lance Dewease said in Keith Kauffman Classic victory lane. “This is like a home to me and I’ve always had success here…”