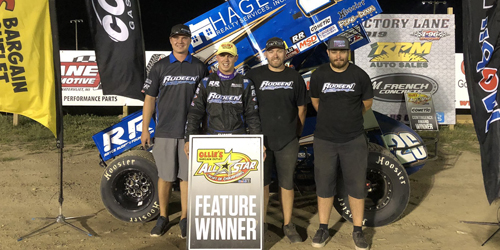 Utilizing finesse, patience, and other’s misfortune, Visalia, California’s Cory Eliason earned his second Ollie’s Bargain Outlet All Star Circuit of Champions presented by Mobil 1 victory of the 2019 season on Friday night at I-96 Speedway in Lake Odessa, Michigan. The $5,000 triumph, his first since scoring a monster payday at Virginia Motor Speedway at the beginning of the points schedule, was accomplished from the outside of row three, eventually taking command on lap 19 and holding off a championship contending Dale Blaney, as well as Premier Motorsports’ Justin Peck, at the end of 30 circuits.

“We just kept getting better and better as the feature went on,” Cory Eliason expressed, driver of the Rudeen Racing No. 26 entry. “Things went our way tonight and we were able to capitalize…”