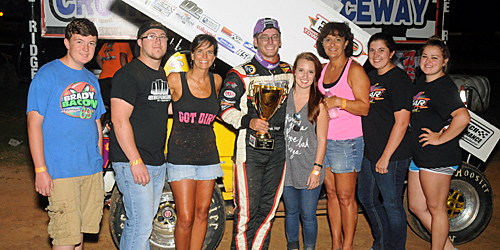 The Wheatley Chronicles – Volume III, No. 60

But that could be changing if Thursday night at Crowley’s Ridge Speedway is any indication.

The Marion, AR, hotshoe took advantage of a mid-race restart to dash by Joe B. Miller and led the rest of the distance to take top honors in the 30-lap USCS “Rumble at the Ridge” main event.

“Andy (McElhannon) kind of showed the fast way around before that caution, I moved down there and it paid off,” Hagar said afterward.

The triumph aboard the familiar, yellow Dynotech-powered No. 9jr J&J was just Hagar’s fourth overall of the year after 16 trips to victory lane in 2014.

While Hagar took command over the last half of the race, the first half was a different story with a three-way duel that also included Miller and Tim Crawley in the early going.

Starting to Hagar’s outside on the front row, Missouri’s Joe B. Miller outdueled Hagar in the early going to snare the early lead with Crawley sliding past Hagar for second by the fifth round.

Four laps later, Crawley aggressively slid underneath a lapped car and Miller getting into turn three. Crawley slapped the upper berm but slid over into the retaining ditch around the outside of turn four as Miller held off Hagar for the point.

Crawley rejoined the field at the tail only to end up in a heap in turn one along with Just Webb a few laps later.

The red flag stoppage changed the fortunes up front, with Hagar sliding past Miller on the restart and then slipping away to secure the win after several laps of battle.

Miller settled for runner-up honors with Brad Bowden rallying from the 14th starting position to claim the show position. Sixth at the mid-race restart, Bowden battled past Marshall Skinner, Terry Gray and McElhannon over the final rounds to reach third.

After nearly slipping past Hagar for second at one point before the midway point, McElhannon crossed the stripe fourth with Gray rounding out the top five.

Heat Moments: While Marshall Skinner raced from third to first on the opening lap of the first heat, Hagar worked forward from fifth to take command on the low side on the seventh of eight laps; McElhannon had heat two under control from the pole until a lap five caution for a Ronny Howard spin, then had to fight off “One Fast” Eddie Gallagher in a side-by-side battle over the final three laps; After Blake Jenkins spun from the lead after three laps, Miller hustled the high side to take the lead away from Morgan Turpen on the sixth round in the third heat; Terry Gray tried to work the top side from sixth but fell just short of nipping Mike Pack at the line in the fourth and final heat.

“B” Main Moments: West Memphis shoe A.G. Rains went third to first on the opening round then weathered a pair of early cautions to take the win; Nick Snyder spun out of a transfer position four laps into the 12-lapper and rallied back to seventh as six transferred; Snyder as well as Ronny Howard and Just Webb were awarded provisionals.

Lap 5 – Zach Pringle spins to a stop in turn four and retires to the pit area on the hook with front end damage.

Lap 9 – Crawley’s big slide for the lead is too big and he gets hung up in the outer turn four ditch. He’ll be back for more.

Lap 14 – The red flag flies when Crawley and Justin Webb are upside down in turn one. No injuries but both are done.

“A” Main Hard Charger: Brad Bowden advanced 11 positions with a run from 14th to third.