Haud Fills In as Saldana is Cut Loose 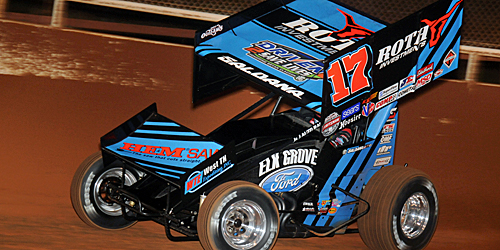 WEST LIBERTY, Iowa (June 23, 2017) – Silly season is officially under way, as Joey Saldana has been released from the Stenhouse Jr./Wood Racing No. 17 World of Outlaws Sprint Car team.

Jac Haudenschild will fill in during this weekend’s pair of events at Iowa’s West Liberty Raceway on Friday night and then Wisconsin’s Beaver Dam Raceway on Saturday night.  “Haud” returns to action after more than a week off after suffering a broken nose.

Haudenschild is not expected to be the permanent replacement with the new full-timer to be announced in the coming weeks.

The team’s twitter account confirmed Saldana’s release, “Today we and @JS17Racing have decided to part ways. Joey helped us build this team and we wish him the best in future endeavors.”

The team was formed over the past off-season.  While Saldana has yet to reach victory lane this year, the team did post a win at Nebraska’s Eagle Raceway with Kyle Larson piloting a second team entry.

Saldana has been mired at 99 career wins since last racing to victory lane at Missouri’s U.S. 36 Raceway on September 17 of last year.