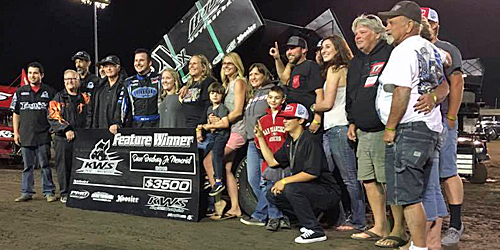 By Jacob Perkins & Elijah Jones, Chico, CA (April 30, 2016) – After trying for over 10-years to win the Dave Bradway Jr. Memorial and suffering through heart break multiple times before Paradise, CA driver Kyle Hirst finally put the bad luck to rest on Saturday night and scored his first career victory at the prestigious event.

The win for Hirst was also another personal milestone and tied him for fifth on the all-time King of the West 410 Sprint Car Series win list with Tyler Walker. It marked his 17th career KWS triumph. The entire night was one that nobody in attendance will ever forget and was certainly one for the ages. The 40-lap main event went non-stop and took under 10 minutes to complete.

“I’ve wanted to win this race for so long and to finally do it is such a special feeling,” Hirst said. “I’ve been close before and something would always happen, so that final lap was definitely nerve racking. Racing with a guy like Sean Becker for the win is always fun and to get it done like that is something I’ll always remember. I can’t thank the Tarlton family and Dennis & Roth enough for the opportunity. I don’t think I’ll get much sleep tonight after that one! I hope all you fans enjoyed that show tonight, because it sure was exciting.”

The A-Main event saw Kyle Hirst hold off Sean Becker in a thrilling race and finish. The victory was Hirst’s first behind the wheel of the Tarlton Motorsports ‪#‎21X‬ and also received an extra $1000 for winning the A-main courtesy Rico Abreu Racing and $500 courtesy of Roth Motorsports, giving him a minimum of $4500 worth of winnings for the night.

Becker would cross the line second in the Menne Motorsports #75, with the Abreu Vineyards #24 of Rico Abreu rounding out the podium in the third spot. Justin Sanders had a solid run in the 4th position. Willie Croft scored a top five finish with his 5th place effort. While Shane Golobic finished 6th, Bud Kaeding 7th, Justyn Cox 8th, Jonathan Allard 9th, and DJ Netto Rounded out the Top Ten.

Rico Abreu started the night out with the fastest lap around the Silver Dollar Speedway with a lap of 11.849. He earned $1000 cash courtesy of Kyle Larson Racing, Manny & Gloria Avilla, Petersen Media, Mancamp Motorsports, John Luther, and David Anderson.

Rico Abreu, Willie Croft, Andy Forsberg, and Sean Becker claimed heat race victories. Each heat winner earned $500 cash courtesy of Rico Abreu Racing, plus a Right Rear Tire & Five Sleeves of tear offs courtesy of Hoserville, and a small trophy to give to a young fan in the grandstands courtesy of Arnolds for Awards, Inc.

The King of the West Sprint Car Series returns to action next Saturday night at Petaluma Speedway for points race #3. The tour will be back at Silver Dollar Speedway on Saturday June 4th for the fourth annual David Tarter Memorial.