Hunter Percent Wins with the Wing 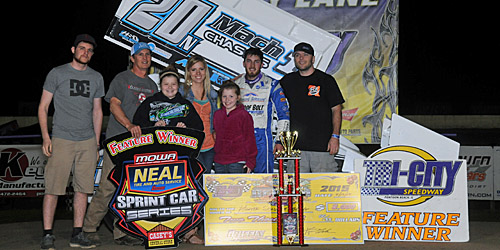 The Wheatley Chronicles – Volume III, No. 33

Lonnie Wheatley, PONTOON BEACH, Ill. (April 17, 2015) – It’s not that Hunter Schuerenberg hadn’t ever won with a wing over his head. It’s just that it had been a while. A “while” as in ten years or so for the Sikeston, MO, racer.

Focusing on USAC’s wingless Sprint Car ranks over the past few years, the 25-year-old Schuerenberg is delving back into the winged wars and came away with a victory in just his third night out by topping Friday night’s Neal Tire MOWA Sprint Series feature event at Tri-City Speedway.

Schuerenberg picked up $2,000 by wiring the field in the 25-lapper aboard the Roof Bolt Xpress No. 20n Mach 1 chassis.

“It’s pretty awesome to be able to get a win just the third night out with this car,” Schuerenberg said in victory lane.

The triumph came one week after Schuerenberg debuted the No. 20n machine at Jacksonville and West Burlington.

“It’s really pretty humbling, we pretty much got our teeth kicked in last weekend with MOWA at Jacksonville and then the NSL race,” Schuerenberg explained after winning the Dash to earn the pole position for the feature.

That teeth-kicking was shortlived with Schuerenberg the class of the field throughout the night.

“It takes a little bit to start getting comfortable again, it really started to feel pretty good in the Dash,” Schuerenberg explained.

Starting from the pole position, Schuerenberg outgunned four-time and reigning MOWA kingpin Jerrod Hull for the lead at the drop of the green flag and led throughout.

Hull closed to Schuerenberg’s rear bumper after each caution but otherwise was never able to mount a serious challenge.

After running the top side of the 3/8-mile oval in the early going, Schuerenberg dropped to the low side in the rubber by then tenth round and was untouchable the rest of the way. “That’s probably my first winged win since about 2005, back when I was driving dad’s car,” Schuerenberg said.

Hull held second until slowing abruptly exiting turn two in the closing laps and pulling to the infield. Running fourth at the time, Brad Loyet took quick advantage by racing by Jordan Goldesberry when the latter got into the back of Hull when he slowed.

Loyet chased Schuerenberg to the line with Goldesberry settling for third. Paul Nienhiser was fourth with Korey Weyant rounding out the top five.

Heat Moments: When Joey Moughan looped it getting into turn one three laps into the first heat, Levi Curry flipped after errant evasive action and was done for the night. Taylor Ferns spun in turn four on the opening round of the second heat, collecting A.J. Bruns. Bruns was forced pitside with damage. Jacob Patton popped an engine on the opening round of the third heat. Jordan Goldesberry rallied from fifth to win the first heat, topping the night’s point charts while Hunter Schuerenberg raced from sixth to second to earn a Dash position. Jerrod Hull won the second heat by a full straightaway while Paul Nienhiser outgunned Brad Loyet at the drop of the green flag and raced on to a convincing win in heat three.

Lap 1 – Austin McCarl comes to a stop in turn four with left front damage and is done for the night.

Lap 5 – Joey Moughan spins in turn four after contact while dicing for position with Jordan Goldesberry.

Lap 13 – The lapped car of Vinny Ward spins amongst heavy traffic in turn one with Brad Loyet narrowly avoiding a harsh meeting with the turn one retaining wall.

“A” Main Hard Charger: A.J. Bruns bounced back from the heat race incident to gain 12 positions by racing from 21st to ninth.