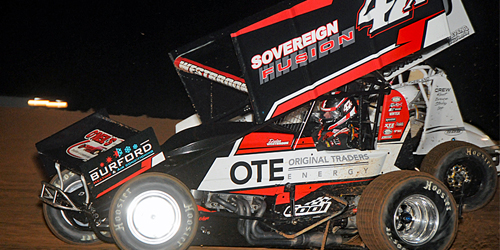 An influx of the nation’s best 360-ci Sprint Car racers and hordes of Sprint Car racing fans will flock to the Little Rock area for the 32nd Annual COMP Cams Short Track Nationals presented by Hoosier Tires that is set to take place atop the ¼-mile I-30 Speedway clay oval next weekend on October 3-5.

A Thursday, October 3, Test ‘N Tune will be followed up a $2,500-to-win preliminary event on Friday and then the prestigious 41-lap, $10,041-to-win STN championship finale on Saturday, October 5.

The field is already one of an international variety with Canadians Dylan Westbrook, Robbie Price and Alex Hill among the elite field of contenders looking to unseat Sapulpa, Oklahoma’s Blake Hahn as reigning STN king.

Hahn battled past Howard Moore and led the final 29 rounds of last year’s 41-lapper to become the 18th different winner in event history.

While there will be no lock-ins from Friday’s $2,500-to-win preliminary, the top two drivers in combined passing/finishing points from Friday and Saturday heats and qualifiers that don’t race into the Saturday feature will be awarded the 19th and 20th starting positions in the Saturday night STN championship finale.  The 21st starting position is reserved for the 2019 I-30 Speedway track champion if needed.

The Tickets:  Day of show prices are $20 on Friday and $28 on Saturday plus a $1 processing fee per ticket if paying by credit/debit card.

Children’s tickets will be available at the event only for just $1 on both Friday and Saturday plus a $1 processing fee per ticket if paying by credit/debit card.

The Camping:  Track camping for RV’s in the pits is $50, reserved for drivers with RV’s first.

The parking on the west side of the property is open for camping and parking as well.  Parking is $10 per car.  Camping is $25 per night with a maximum of $100 for anyone that arrives on Tuesday night.