KTJ Has it His Way at Fall Nationals 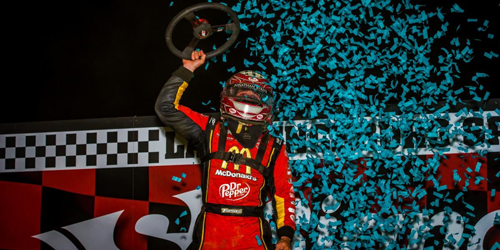 Kevin Thomas, Jr. was bound and determined to be mistake-free in Saturday’s Fall Nationals at Indiana’s Lawrenceburg Speedway.

Exactly one week earlier at Eldora Speedway, the Cullman, Ala. native had a pair of chances, first in the sprint car feature where he led the first 18 laps of the 30-lap race before slapping the turn four wall and losing the lead.  Later that same night, he was a dominant figure in the Silver Crown main, leading the first 40 circuits of the 50-lapper before wall contact again knocked him out of the lead.

Saturday at Lawrenceburg, flawless was the word that comes to mind in describing Thomas’ run down the stretch to win his second Fall Nationals in the last three years, a $10,000 grand prize and his 27th career USAC AMSOIL National Sprint Car feature, moving him past Tony Elliott and Dave Steele and into a tie for 16th on the all-time list alongside Brady Bacon.

“I know our stuff’s running really well and I like Lawrenceburg already,” Thomas said.  “For us to come down here and have speed right off the bat, it’s just something we’ve been really working hard for this whole year…”