Larson & Bell Filling in for Smoke at Volusia 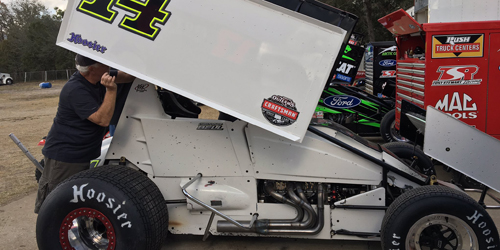 BARBERVILLE, Fla. (February 15, 2017) – Kyle Larson and Christopher Bell will fill in for Tony Stewart aboard his No. 14 Sprint Car during this week’s DIRTcar Nationals at Volusia Speedway Park.

It was revealed today that Monster Energy NASCAR Cup star Kyle Larson will take the seat of Stewart’s Sprint Car for tonight’s All Star Circuit of Champions event that launches the DIRTcar Nationals.

After tonight’s event, current NASCAR Camping World Truck series contender Christopher Bell is slated to complete the balance of the week in Stewart’s No. 14 including Thursday’s All Star event and then the opening trio of 2017 World of Outlaws events on Friday, Saturday and Sunday.

Bell drove for Stewart on several occasions during the 2016 season.

Neither Larson nor Bell are strangers to the Sprint Car ranks.  In a limited number of winged 410-ci Sprint Car starts last year, Larson picked up three wins to go along with a Turkey Night Midget score while Bell recently topped the esteemed Chili Bowl Midget Nationals in Tulsa, OK, after picking off four winged Sprint Car wins during the 2016 season.