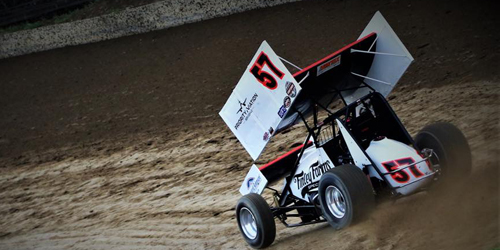 After the Elk Grove, CA, native won Wednesday night’s preliminary feature, he admitted that, “I have a pretty tough phone call to make, but I think I know what he’ll say.”

Perhaps what he didn’t expect was the public outpour of support and encouragement that blew up social media soon after that checkered flag flew.  And in this age of social media, it made a difference as NASCAR team owner Chip Ganassi heard the pleas.

“My phone and my Twitter accounts been blowing up, ‘Let’s let Kyle race’, I’ve been hearing all the comments,” Ganassi explained in a video release on Twitter today.  “Okay, okay, we’re gonna let him race at Knoxville.  Kyle is an amazing talent, let’s have him win at Knoxville then bring him back to win here at Michigan.”

He had just one thing to ask of dirt track fans in return. “And then I want all you fans at Knoxville to turn your TV’s on to NASCAR on NBC Sports to watch him win at Michigan too or get your butts up here to watch it.”

Larson released his own public statement on Twitter as well, saying, “Thank you for all the support you’ve given me.  Obviously, winning the NASCAR championship is my main focus and main goal.  But I’m also extremely happy that Chip is allowing me to go back to Knoxville on Saturday and try to win the Knoxville Nationals championship as well.  That’s sort of our Daytona 500 of Sprint Car racing, so to have the opportunity to go back and try to win that is very special to me, I can’t thank Chip enough for that.”

Larson echoed Ganassi’s only request.  “Also, make sure you watch me and Jamie on Sunday here at Michigan on NBC Sports as I go for my third race win in a row here, or come on up and watch, it’s not that long of a drive.”