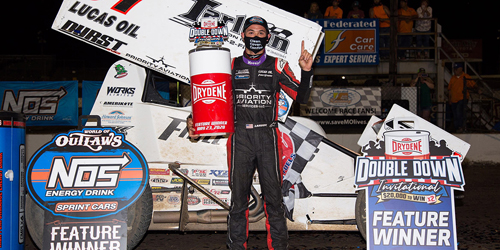 Kyle Larson climbed out of his #57 Sprint Car and immediately threw his arms around crew chief and car owner Paul Silva.

The two embraced each other for a moment that was both congratulatory and compassion.

One of the highest profile drivers in motorsports, Larson’s last month and a half has been “life changing,” he said. By his side for the whole journey has been Silva, his family and fans.

On Saturday night, in front of a limited crowd of fans at Federated Auto Parts Raceway at I-55 on Memorial Day Weekend, he was able to turn a page in his journey and reward those who stuck behind him with a World of Outlaws NOS Energy Drink Sprint Car Series victory. After a derogatory comment he made during an online racing event cost Larson much of what he built in NASCAR, he was visibly relieved after winning just three races into his return to his dirt racing roots.

“Can’t thank all of you fans enough for the support,” Larson said. “It really means a lot. My family. My friends. This win means so much personally. I can’t even describe it…”