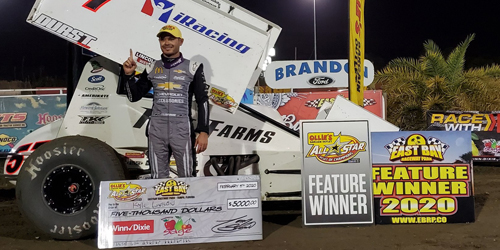 The 30-lap triumph, the product of an outside-front row starting position, was just one portion of Larson’s near-domination to close-out the 2020 All Star Circuit of Champions Florida visit. The Elk Grove, California-native set the evening’s fastest time during qualifying time trials followed by a convincing victory during the second of two dashes.

“My goal here as of lately was to get to the double-digit win mark in the (NASCAR) off-season and we were able to get number ten here tonight,” Kyle Larson explained, driver of the Paul Silva-owned, Chevrolet Accessories, Finley Farms, No. 57 sprint car. “That’s not a bad stretch of races since Homestead ended. Hopefully we can move on and win a bunch of NASCAR races with Chip Ganassi Racing…”