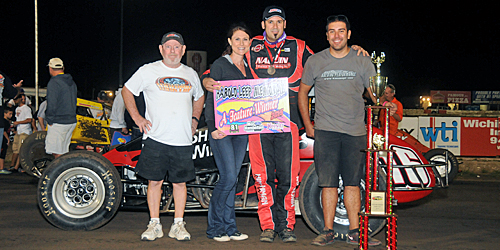 The Wheatley Chronicles – Volume III, No. 73

It was a virtual repeat of last year’s “Harold Leep Memorial” main event with “The Magic Man” leading all 30 laps en route to the $2,500 payday aboard the Sherwin Williams No. 16 Maxim.

“I love this place, it’s awesome to win here two years in a row,” Martin There’s nothing like a little home field advantage. Or in this case, home track advantage.

This time, Martin had to fend off Tijeras, New Mexico shoe Josh Hodges much of the way to preserve the victory.

“He (Hodges) has spent most of the summer racing back in Indiana and it has definitely paid off, I knew he was there,” Martin explained. “I felt like I had the bottom covered pretty good, but I was concerned that the middle might start working for him.”

Hodges made several moves to Martin’s outside, but was never able to make it stick.

“I don’t know exactly what it is, but I usually go good on hammer down racetracks like this,” Martin said after his second triumph of the year.

After several cautions in the opening 11 circuits, the final 19 rounds ran off in non-stop fashion. And after fending off some Hodges bids, Martin ultimately slipped away to a half straightaway advantage as Hodges, Charles Davis, Jr., Ryan Bernal and Brady Bacon all battled for position in his wake.

Battling through some traffic along the way, Davis, Jr., finally slipped underneath Hodges on the 27th round to capture runner-up honors in the Massey Motorsports No. 50 with Hodges settling for the show position in his No. 74x.

Bacon moved into fourth just past the midway point with Bernal rounding out the top five.

Heat Moments: Pole starter Dennis Gile dodged disaster at the start of the first heat race when he climbed Harli White’s left front with right rear getting into one. While Gile went on, White slowed to bring out a caution but rejoined and ultimately tried a slider on both Gile and Stevie Sussex in the final corner. Gile crossed back under for third with White nipping Sussex for fourth; After Andrew Deal slipped off turn four to set up a green-white-checkered in the first heat, Jeremy Campbell got some air in turn two after climbing a Sussex right rear. Campbell landed safely and continued on; After Fred Mattox slid off the top of turn one in the second heat, the final two heats ran off without incident; Front row outside starter Davis, Jr., got the jump on Martin in the heat two restart and went on to the win. Second worked to Martin’s advantage as the six-car invert landed him on the pole of the feature event.

7 laps – Andrew Deal stops in turn four and is done for the night.

Lap 8 restart – Fred Mattox goes for a hard ride in turn two. He walks away uninjured.

“A” Main Hard Charger: Harli White was best of several drivers to gain a handful of positions with a run from 12th to seventh.