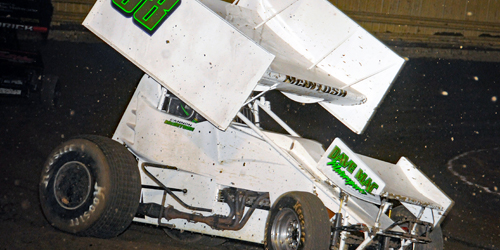 Lonnie Wheatley, BIXBY, Okla. (April 19, 2019) – While the Lucas Oil POWRi National Midget series is the primary pursuit of 2019 for Cannon McIntosh, the 16-year-old is still finding time to mix in a few winged 360-ci Sprint Car starts as well.

While McIntosh has made a previous Midget start at Humboldt, Friday’s card will mark his first Sprint Car start atop the 3/8-mile clay oval.

Last Friday, McIntosh made his way to the 19th starting position in the ASCS Sooner Region feature at Creek County Speedway by rallying into the final transfer position from the first of two “B” Mains aboard the Dave Mac Motorsports No. 08 Sprint Car.

He made the most of it from there, picking off car after car during the 25-lapper to climb all the way to eighth and earn Hard Charger honors in the process.

“We made a good comeback,” McItnosh said of the strong run.  “We’re getting this Sprint Car stuff figured out as we go, hopefully we can keep building upon that Friday night at Humboldt.”

Up Next: ASCS Sooner Region vs. NCRA Sprint Cars at Humboldt (KS) Speedway on Friday night.

If you would like Cannon McIntosh Racing press releases e-mailed directly to you, send your e-mail address to Lonnie Wheatley at lonniewheatley@gmail.com.