No Splits at Short Track Nationals 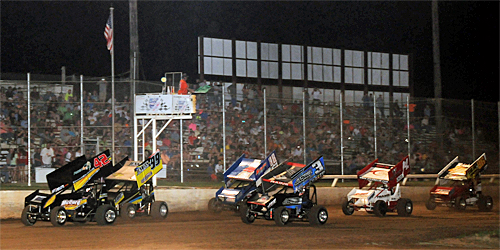 Lonnie Wheatley, LITTLE ROCK, Ark. (September 30, 2016) – With the premier event in 360-ci Sprint Car racing just around the corner, the format for the $15,000-to-win COMP Cams Short Track Nationals presented by Hoosier Tires set for November 2-5 at Little Rock’s I-30 Speedway has been determined.

In a departure from recent years, this year’s edition of STN will no longer feature split fields on the qualifying nights. This year, all cars will be eligible to run on Thursday and/or Friday night after a Wednesday night Test ‘N Tune.

The Thursday and Friday qualifying nights will feature a full card of heats, qualifiers and feature with the top three in each night’s “A” Main locking into the Saturday night STN finale. And, this year the lock-in pay has been bumped to $500 to assure a minimum take of $2,500 for the weekend along with a starting spot among the front three rows of the $15,000-to-win, $2,000-to-start main event.

Each driver’s top qualifying night score will set the grid for Saturday night heat races that will award more points to set the balance of the championship night feature lineups as more than $100,000 will be paid out over the weekend.

STN entries have already started rolling in, with entry forms for the event available at http://www.i-30speedway.com/flyers/2016%20STN%20Flyer.pdf. Entries received by October 26 just $150, with entries after that at $250.

Entry fees may be submitted on PayPal as well with a $5 processing fee just as with paying via credit/debit card. Checks, money orders and cashier’s checks are accepted and may be mailed to I-30 Speedway c/o Pit Road Bar & Grill, 13219 Interstate 30, Little Rock AR 72209, made payable to Tracey Clay.

Three-day advance tickets to the 29th Annual COMP Cams Short Track Nationals presented by Hoosier Tires at I-30 Speedway are available for just $55 cash or $57 if paying by PayPal or credit/debit card.

Pit passes for the event will be $15 for the Wednesday Test ‘N Tune, $35 on both Thursday and Friday and then $40 on Saturday.