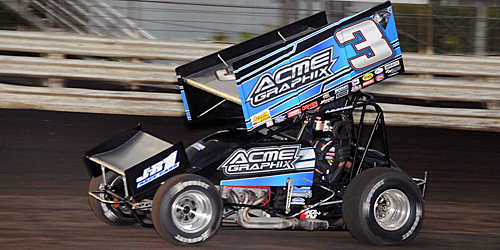 Lonnie Wheatley, LITTLE ROCK, Ark. (October 19, 2016) – As is the case annually, many of the biggest names and most diverse group in Sprint Car racing will soon converge upon I-30 Speedway for the 29th edition of the COMP Cam Short Track Nationals presented by Hoosier Tires.

A small sample of the latest entries for the $15,000-to-win event set for November 2-5 includes the likes of Sammy Swindell, Shane Stewart, Aaron Reutzel, Tony Bruce, Jr., and Derek Hagar.

The pre-entry deadline for the event is just one week away on Wednesday, October 26, and those entered by that date receive a free driver’s pit pass for Thursday, Friday and Saturday. Entry forms are available at http://www.i-30speedway.com/flyers/2016%20STN%20Flyer.pdf.

Entries received by October 26 are just $150, with entries received after that at $250. Entries after October 26 do not receive the free driver pit pass. Entry fees may be submitted on PayPal as well with a $5 processing fee just as with paying via credit/debit card. Checks, money orders and cashier’s checks are accepted and may be mailed to Pit Road Bar & Grill c/o Tracey Clay, 13219 Interstate 30, Little Rock AR 72209, made payable to Tracey Clay.

Sammy Swindell and Tony Bruce, Jr., rank as two of just a handful of drivers to top the prestigious Short Track Nationals on multiple occasions. Swindell most recently took STN honors in 2013 after previous wins in 2011 and 1990 while Bruce, Jr., went back-to-back in 2008 and 2009.

Both Swindell and Bruce, Jr., chase down another STN title on the first weekend of November after some form of brief retirement or semi-retirement.

Swindell joins forces with long-time West Memphis contender A.G. Rains, who will be in action as well in a team car. The duo has proven a formidable force when teaming up in 2016 with Swindell driving the Rains’ entry to his first Knoxville 360 Nationals title earlier this year.

Hired gun now rather than car owner, Tony Bruce, Jr., takes the wheel of the Missouri-based Smith Racing No. 86 in his attempt at a third STN crown. Running a select slate of events thus far in 2016, Bruce, Jr., picked up an NCRA win at Wichita’s 81 Speedway along the way.

A top contender at the Short Track Nationals over the years, Bixby, Oklahoma, native Shane Stewart jumps into the No. 88 typically piloted by Scottie McDonald. Among the upper echelon on the World of Outlaws Sprint Car trail in the Larson/Marks No. 2 entry, STN glory has eluded Stewart over the years even though he is typically among the leading contenders.

Stewart has won a pair of STN preliminary features and has a pair of runner-up finishes (2003 and 2007) and a pair of third-place finishes (2009 and 2011) among six career top-fives in STN finales.

Add reigning National champion Aaron Reutzel of Clute, TX, to the mix as well. Reutzel has been nearly unstoppable in his I-30 Speedway appearances in recent years, chasing Christopher Bell to the line for STN runner-up honors in 2014 and then winning a dramatic Short Track Open last year before rain wiped out the rest of the weekend.

Repping the Mid-South, Marion, AR, native Derek Hagar will likely rank among the most prolific 2016 feature winners of the STN field with 15 triumphs to his credit this season. Among his victories are a $10,000 score in Wichita, KS, and an I-30 Speedway win during September’s Ralph Henson Memorial.

Entries continue to roll in as a stacked field will battle it out to join the list of STN champions that most recently includes Christopher Bell.

Now a top contender with the Camping World NASCAR Truck series, Bell still reigns as the defending STN champion after beating Aaron Reutzel and Brian Brown to the stripe in 2014 to become the youngest winner in event history at just 19 years of age.

The Entries: Entry forms are available at http://www.i-30speedway.com/flyers/2016%20STN%20Flyer.pdf. Entry is $150 if entered by October 26, or $250 after October 26. Entries submitted by October 26 receive one free driver pit pass for Thursday, Friday and Saturday.

The top three from each qualifying night will be locked into Saturday night’s $15,000-to-win, $2,000-to-start STN Championship Finale. Those six drivers will battle it out in Saturday’s Pack’s Dash for Cash to determine the alignment of the front three rows of the championship main event.