Pringle Passes on the Last Lap for I-30 Glory 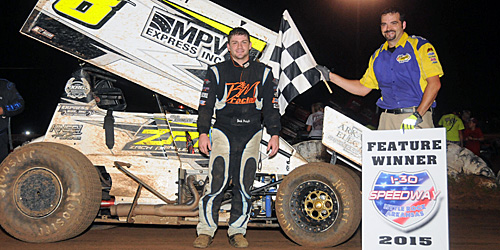 The Wheatley Chronicles – Volume III, No. 61

Well, at least one person wasn’t a fan of the exciting finish to Saturday night’s 25-lap Interstate Cup Sprint Car feature at I-30 Speedway; Jordon Mallett, who was served up a heaping helping of heartbreak by Zach Pringle.

Pringle had been in non-stop chase mode since taking over second on the fifth round when Brandon Hanks clipped an infield tire exiting turn four and slid to a stop to the infield, where he watched the rest of the action unfold.

A half straightaway back as Mallett picked through traffic on the bottom of the track past the halfway point, Pringle kept digging in the Zach Pringle Racing/MPV Express No. 8z Triple-X Sprint Car.

And it paid off, with Pringle within just a couple of car lengths with two laps to go.

“When I went to the top in one and two for a couple of laps or so, I was able to put together some really good laps and closed a lot of ground,” Pringle said.

It all came down to the dramatic final lap, with Pringle passing Mallett not just once, but twice with a lapped car playing the ultimate wildcard in the final corner.

Working the top side, Pringle edged by the unsuspecting Mallett and held the advantage as the duo charged off turn two and down the backstretch.

But, when Pringle pushed on the cushion getting into turn three, it looked like crisis averted for Mallett. At least for a millisecond or two it looked that way.

Mallett edged back ahead on the lower portion of turns three and four, only to clip a lapped car exiting turn four. The contact sent Mallett into a spin he couldn’t recover from. With the checkered flag in sight as he exited the four corner, Mallett spun to a stop backwards and watched Pringle and the rest of the field drive right by.

“I thought I gave it back away when I pushed getting into three,” Pringle said after his second triumph in three Interstate Cup rounds of competition at I-30 Speedway. Each Interstate Cup round at Riverside International Speedway in West Memphis has fallen victim to rain thus far.

Working his way from the seventh starting position up to third within the opening ten laps, A.G. Rains took over the runner-up position with the final corner dramatics with Dalton Davis taking the show position.

Gunning for a three-race sweep of the Arkansas weekend after victories at Crowley’s Ridge and Batesville the previous two nights, Derek Hagar had to settle for fourth after starting 12th.

Tim Crawley Hard Charged his way up to fifth after winning the “B” Main to start 16th.

Heat Moments: After starting seventh, Mallett worked his way up to third and then took second from Charlie Louden at the line in the third heat to earn enough passing points to capture the pole starting position for the feature; Hanks went fourth to first on the opening lap of the third heat, good enough for front row outside of the feature; Pringle’s bid slider of Hagar getting into turn three midway through the first heat proved big in the feature lineup, with Pringle holding Hagar off at the finish for third; the only heat race caution came five laps into third heat when Jerod Roller bounced to a stop at the top of turn four, a fortunate outcome to a precarious three-wide entry to turn three.

“B” Main Moments: After a pair of aborted starts, Crawley needed less than two laps to take the lead from Rick Pringle en route to the win, with Taylor Tidmore holding off a closing Roller from 11th for the fifth and final transfer.

“A” Main Cautions: None.

“A” Main Hard Charger: Tim Crawley picked up 11 positions by racing from 16th to round out the top five.