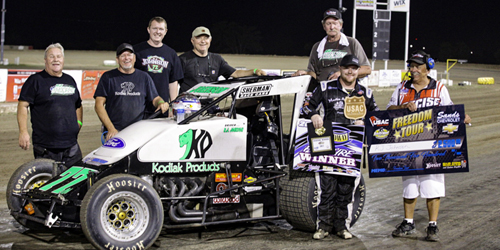 The Wheatley Chronicles – Volume V, No. 38

He made up for it by racing to victory lane in Friday night’s third round aboard the Michaels No. 77m atop the 3/8-mile 81 Speedway.

The $2,500 triumph in the 25-lapper didn’t come without a perilous moment though, as the reigning series champ hit the cushion going into turn one and biked it severely.  Johnson saved it and went on to win by nearly a half-straightaway over Charles Davis, Jr.

“I messed up and gave one away to start the week, and I almost pulled off a repeat to give away another one,” the Phoenix, AZ, shoe said in victory lane.

It capped off a perfect night for the Ford-powered Kodiak parts team after Johnson won both his heat race and qualifying race earlier in the evening.

“It was a perfect night, this car was great all night,” Johnson commented.

While Johnson won both his heat and qualifier, Davis, Jr., earned the pole position and gunned into the early lead.  Davis, Jr., paced the initial nine circuits before Johnson slid by to take command for keeps.

Johnson navigated a technical cushion the rest of the way to secure the triumph ahead of Davis, Jr., with Dennis Gile capturing his second podium finish of the week in third.  Tye Mihocko was a close fourth with Dustin Morgan rounding out the top five to rank as the only driver to finish among the top five through all three opening rounds.

The original start to the feature immediately resulted in a red flag when fourth-starter Stevie Sussex hooked the cushion getting into the first turn and went for a wild ride off the end of the track.  Sussex was uninjured.  The balance of the 25-lapper was only interrupted once more by a minor turn one spin after six laps.