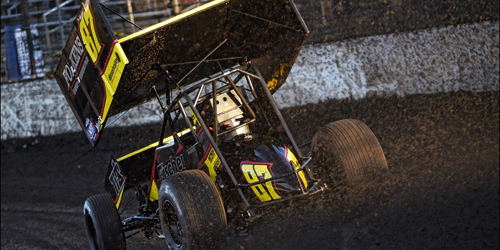 Aaron Reutzel and the Baughman-Reutzel Motorsports No. 87 Sprint Car team have picked right up in 2020 where they left off at the close of the 2019 season.

After racing to a nation’s best 18 410-ci feature wins last year and a second consecutive All Star Circuit of Champions title, Reutzel and the Folkens Brothers Trucking/Dissolvalloy Downhole Revolution Triple-X Sprint Car team went two-for-four in victories with the All Stars over the past week and reeled off three consecutive top-ten finishes in World of Outlaws competition as well at Volusia Speedway Park’s DIRTcar Nationals.

After winning the second night of All Star competition at the DIRTcar Nationals last Thursday and then picking up another one in dominant fashion in the series return to Tampa’s East Bay Raceway Park on Monday night, Reutzel summed it up, ““We kinda picked up right where we left off last year. Whenever you’re running that good at the end of the year, you don’t want the year to end. Momentum can change and you can never be too sure how the next year is going to start…”