Reutzel Reels in Another All Star Triumph 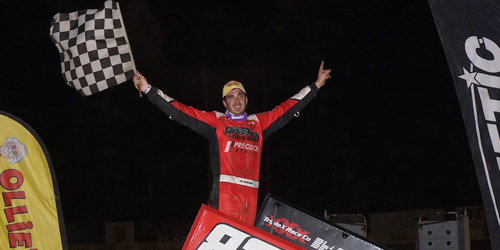 After a frustrating outing one night prior that ultimately resulted in a ‘DNF’ finish, Clute, Texas’ Aaron Reutzel redeemed himself completely during his Saturday night stay at Plymouth Speedway in Plymouth, Indiana, and secured his seventh Ollie’s Bargain Outlet All Star Circuit of Champions presented by Mobil 1 victory of the 2019 season; his first since Utica-Rome Speedway in mid-July.

A convincing victory to say the least, Reutzel led every lap of the 30-lap program at the Plymouth short track, utilizing patience to maneuver through periods of heavy lapped traffic all while holding off a fast closing Brock Zearfoss, as well as an eighth starting Greg Wilson. The $5,000 triumph also allowed Reutzel to chop into Dale Blaney’s championship points lead, cutting the advantage down to ten markers. Blaney entered the evening with a 26-point advantage, all of which built from Reutzel’s ‘DNF’ result at I-96 Speedway.

“Top, bottom, middle; we were comfortable all over tonight. That’s something we have been working really hard on…”