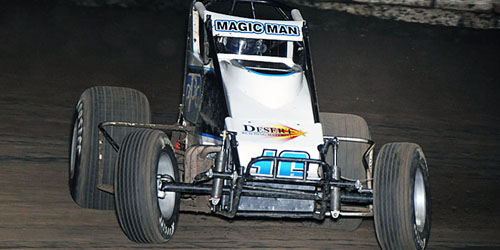 The Wheatley Chronicles – Volume III, No. 65

Lonnie Wheatley, TULSA, Okla. (July 21, 2015) – Gunning for the number one ranking for the third year in a row, Phoenix shoe R.J. Johnson holds down the number one spot in the latest edition of the Beaver Stripes Non-Wing 360 Sprint Car Power Rankings.

With seven triumphs to his credit this season, Johnson has opened up a 50-point advantage after a top-ten run in recent USAC Southwest action at Las Cruces. With a runner-up finish in that Las Cruces event, Charles Davis, Jr., moved past Ryan Bernal for second.

The winner of that Southern New Mexico Speedway event on July 11, Yuma native Mike Martin made the jump from 16th up to ninth with Wisconsin’s Rob Caho, Jr., making the move into the top ten as well.

Number of Drivers to Earn Points: 146