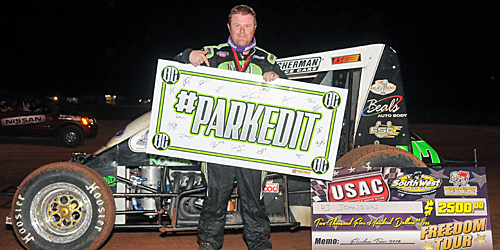 The Wheatley Chronicles – Volume IV, No. 38

The triumph didn’t come without an intense struggle though, as the Phoenix, AZ, racer had to outduel Caney, KS, shoe Andrew Deal over the final ten laps through heavy traffic to secure the $2,500 payday aboard Bill Michaels’ Ford-powered Kodiak Products/Beal’s Auto Body No. 77m.

“I’ve been waiting over a week for the opportunity to say this, we ‘Parked It’ for Bryan Clauson tonight,” Johnson exclaimed upon climbing out of his car in victory lane.

“I came here to win, I wasn’t going to let lapped traffic stop that,” Johnson commented.

While Johnson gridded the feature field inside the third row, Memphis-area shoe Nicholson outgunned New Mexico’s Josh Hodges for the lead at the drop of the green flag and paced the early rounds ahead of Mike Martin with Johnson up to third by the fourth round as Hodges slipped back to sixth after a pair of miscues.

Johnson battled past Martin for second and was perched on Nicholson’s tailtank when the caution flew after seven laps when Martin came to a stop atop turn four with front end woes. Martin caught a break and rejoined the action when Koby Barksdale spun after contact in turn two on the restart and collected Craig Carroll, who was forced pitside.

Johnson pounced on Nicholson on the restart for the lead and began to slip away from the pack as Deal raced into second with Hodges back up to third by the 12th round as past Sprint Bandits TNT contender Nicholson slipped back to fourth.

Johnson cruised out front over the mid portion of the race, but his Sunday drive through the countryside turned into a Manhattan logjam with traffic widening the eyes of pursuers Deal and Hodges.

Deal moved in and slipped by Johnson for the point after 22 laps. Johnson retaliated, with the duo fighting their way through traffic and passing one another several times over the closing rounds.

“He got by and I followed him for a lap or so and saw exactly what he was doing, then I knew what I had to do to beat him,” Johnson explained.

It worked, with Johnson surviving to capture his third career “Freedom Tour” feature win with Deal settling for runner-up honors and Hodges in the show position.

Shon Deskins crossed the stripe fourth with Nicholson netting a fifth-place finish in his first non-wing start since a USAC National event at West Memphis in 2013.

The Fourth Annual USAC Southwest Sprint Cars “Freedom Tour” resumes at Creek County Speedway near Sapulpa, OK, on Thursday night before moving on to Wichita’s 81 Speedway on Friday and then concluding at Dodge City Raceway Park on Saturday night. 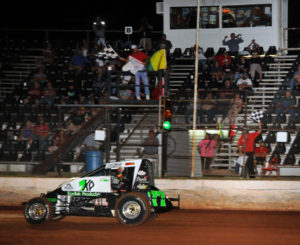