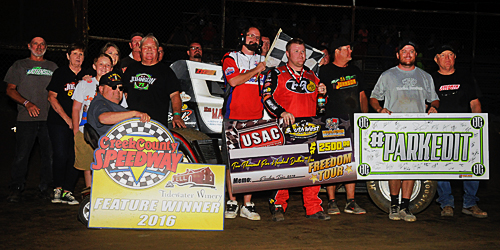 The Wheatley Chronicles – Volume IV, No. 39

And in the process, Johnson shattered the hopes and dreams of the night for Dennis Gile, who was just three laps away from capturing his first career series triumph after setting the pace for 27 rounds in the 30-lapper.

“Dennis (Gile) did a great job, the restarts were my only real chance to even get back in the race,” Johnson commented after his eighth overall USAC Southwest win of the year aboard Bill Michaels’ Ford-powered Kodiak Products/Beal’s Auto Body No. 77m Sherman-chassis.

After rallying from seventh to win his heat race, Johnson gridded the feature field in sixth as Gile gunned into the lead from the pole position ahead of fellow front row starter Josh Hodges.

And all that ensued simply set the stage for the frantic final laps that had the crowd on its feet.

With Gile out front aboard the Dennis Gile Quarterback Academy No. 13g, Johnson was only fifth when 2015 Creek County “Freedom Tour” winner Blake Hahn did a 360-degree spin in turn two to precipitate a caution after a dozen laps.

Johnson got his elbows up and worked past Koby Barksdale and Shon Deskins to climb to third by the time Andrew Deal spun four laps later and then slid past Hodges for second entering turn three on the lap 17 restart.

Following one final caution for another Hahn spin in turn four with 20 laps in the books, the battle was on with Johnson and Hodges turning up the heat on Gile for the point.

Johnson slid past Gile for the lead in turns three and four momentarily on lap 27, only to have Gile counter the move and recapture the lead exiting turn four.

The reigning USAC Southwest Sprint Car champion made the move stick the next time around and raced on to the stripe as Hodges and Gile traded sliders over the final pair of laps. Hodges got the final advantage to land runner-up honors in the Jackson Compaction No. 74x with Gile settling for the show position.

In the thick of the battle throughout, Koby Barksdale landed a fourth-place finish with Deskins rounding out the top five. Tye Mihocko was sixth with Charles Davis, Jr., Kyle Clark, Alex DeCamp and Anthony Nicholson completing the top ten.

Jordon Mallett, Barksdale, Johnson and Cameron Hagin topped heat race action for the 33 car field with Clark and Nicholson winning the “B” Main.

Casey Wills night ended early after a wild ride down the backstretch in the third heat. Wills was uninjured. 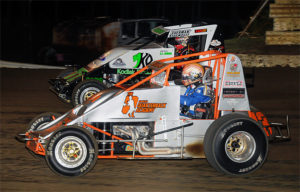