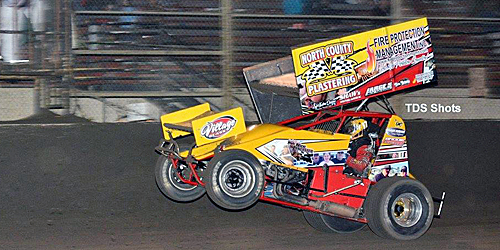 The Wheatley Chronicles – Volume III, No. 78

Lonnie Wheatley, TULSA, Okla. (August 27, 2015) – The battle for the top spot in Rod End Supply Winged 360 Power Rankings is indeed a heated one with just 18 points separating the lead trio of Sanders, Bergman and Reutzel.

Picking off another pair of wins last weekend to run his season total to 17 triumphs, Prunedale, California’s Justin Sanders has moved to the top of the Rod End Supply Winged 360 Power Rankings.

His lead is a slim one though, with Washington native Seth Bergman just nine points back after an ASCS Gulf South sweep this past weekend to push his season win total to 11 triumphs.

And just another nine points back is Clute, TX, racer, Aaron Reutzel, the current ASCS National Tour points leader that picked off a $13,000 payday at Sedalia, MO, on Sunday.

With Sanders, Bergman and Reutzel set to battle it out for the number one ranking over the latter part of the season, Johnny Herrera and Mark Smith round out the current top five while New York’s Jason Barney has made the biggest recent move among the upper portion of the standings with a jump from 28th to eighth.

Number of Drivers to Earn Points: 752