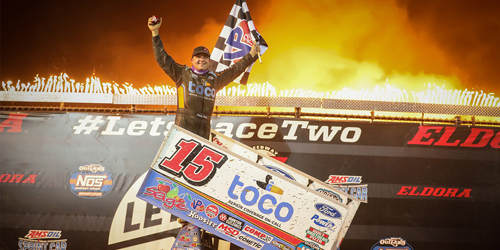 He used that “magic” to cruise to his second World of Outlaws NOS Energy Drink Sprint Car Series Eldora Speedway win of the year Wednesday night, during the make-up #LetsRaceTwo event – sweeping the #LetRaceTwo races for the second year in-a-row.

To Schatz, though, there is no “magic.” It’s a matter of knowing what to do, he said, and having the experience to do it.

“The misconception in this sport is there’s always something magic, there’s one thing you can do to make yourself better,” said Schatz, 10-time Series champion from Fargo, N.D. “It’s not. It’s ten thousand little things and this team has learned that over the years…”