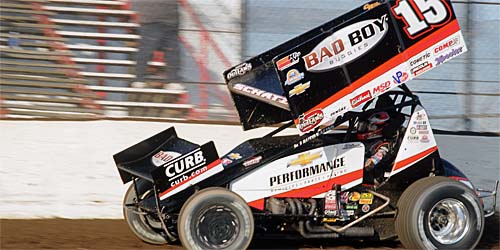 The Wheatley Chronicles – Volume III, No. 44

Lonnie Wheatley, TULSA, Okla. (May 13, 2015) – Fresh off a clean sweep of this past weekend’s World of Outlaws double at Eldora Speedway, Donny Schatz has extended his STIDA Winged 410 Power Rankings lead as the Outlaws venture in central Pennsylvania for the first time beginning tonight at Lincoln Speedway.

Snapping out of an Eldora funk that stretched back to 2009, Schatz topped both nights of action to extend his STIDA Power Rankings lead to 41 points over Paul McMahan. Schatz also ran his North American season win total to eight wins, a mark he didn’t reach until June 29 of last year when he eventually won 26 feature events.

While McMahan still holds second, Shane Stewart jumped ahead of Joey Saldana for third while Kerry Madsen climbed back into the top five.

At least nine of the top ten drivers in STIDA Winged 410 Power Rankings are expected to be in World of Outlaws action in Central PA this weekend with seven Outlaws and the Posse duo of Greg Hodnett and Brian Montieth among the top ten.

Montieth and Hodnett both tuned up for Outlaw action with wins this past weekend, as Montieth topped Williams Grove and Hodnett was best at Port Royal. Taking the Lincoln tune-up was 13th-ranked Danny Dietrich.

Danny Lasoski climbed four positions from 15th to 11th after his NSL win at Knoxville on Saturday while runner-up Tim Kaeding jumped five positions to 19th.

Brian Brown is the only one to break into the top 25 this week, making a move up to 21st.

Brad Loyet captured his first 410 win by topping Friday’s NSL card at Eagle while Bud Kaeding picked of his second consecutive KWS win with a Saturday score at Petaluma.

Number of Drivers to Earn Points: 272