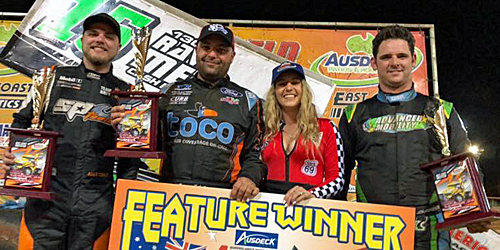 From Archerfield Speedway PR – ARCHERFIELD, Qld (December 28, 2019) – There are plenty of American Sprintcar drivers competing on Australian soil at the moment, but only Ausdeck Archerfield Speedway can genuinely lay claim to hosting the very best of them, evidence of which was in abundance on Saturday night (December 28) when 10-time World of Outlaws champion Donny Schatz dished up a dazzling demonstration of his sublime skills to win round eight of the East Coast Logistics Track Championship.

Despite starting from position 14 after accepting the BK Trading Challenge to invert the field, Schatz had moved to the front by half race distance and left the field in his wake to clinch his second consecutive feature race win.

As was the case in the previous round just 48 hours earlier, Luke Oldfield proved to be Schatz’s biggest threat throughout the night and would advance from the sixth row to finish third behind Cody Maroske, who took maximum advantage of the good fortune that the inversion bestowed upon him to score his best result for the Erhart Motorsport team. Series leader Kevin Titman was solid again in finishing fourth, as was Callum Walker in fifth, with Bryan Mann bouncing back from a spin to snare sixth ahead of Brent Kratzmann, Andrew Scheuerle, Mick Sauer and Dan Murray.