Shebester Scores as POWRi West Midgets Debut at I-30 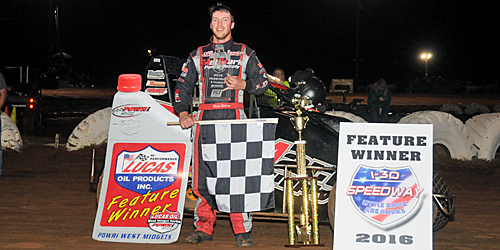 The Wheatley Chronicles – Volume IV, No. 12

After winning the Dash for Cash to earn the pole starting position for the feature, Shebester gunned into the lead at the outset and led all 25 laps en route to victory lane.

“That about wore me out,” Shebester said of the cowboy-up track upon climbing from the MelMark Pipe & Supply No. 82m Midget.

Shebester denied the challenges of Blake Edwards and Jason McDougal until they tangled in turn four after 19 laps, then held off the charges of Tucker Klaasmeyer over the final circuits to preserve the victory.

Klaasmeyer settled for runner-up honors, while Kyle Jones surged from the tail of the field to claim the show position after swapping cars following heat race issues. McDougal raced back up to fourth in the closing rounds with Nick Bailey rounding out the top five.

The beginning of the feature was delayed when Austin Shores took a hard ride down the frontstretch. Shores was taken to a local facility for observation.

After winning the previous night’s event at Outlaw Motor Speedway, Matt Sherrell had no Little Rock luck. Sherrell cut a right rear tire when clipped by a spinning car one lap into his heat race and then was collected in a turn two incident on the initial attempt to start the feature event.

Other drivers running into feature misfortune included defending series champion Anton Hernandez and Andrew Deal. Hernandez held down third until losing power in the final pair of laps while Deal was fourth when his left rear tire disappeared into the treeline off of turn three on a lap 23 restart.