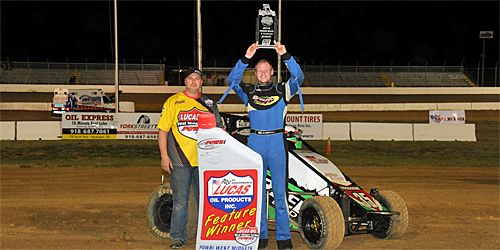 The Wheatley Chronicles – Volume IV, No. 11

The Owasso, OK, racer gunned into the lead from the front row outside at the outset and paced the field throughout to post his second triumph of the young 2016 season.

It wasn’t without a threat though, as Kennedale, Texas’ Kyle Jones tried a pair of sliders along the way that Sherrell was able to fend off.

Following a caution for debris just past the midway point, Jones turned the heat up on Sherrell and slid in front briefly in turns one and two on the 14th lap only to have Sherrell counter the move.

Jones made one list ditch effort on the final lap, but Sherrell denied it once again to pick up the win in the Sherrell Paint & Body No. 35 Midget.

“I didn’t realize anyone was there until pretty late and then I saw him,” Sherrell commented in victory lane. “He slid across pretty hard, I knew he would have a hard time catching the cushion right.”

Sherrell took the checkered flag ahead of Jones, who held off Jason McDougal in the final pair of corners to claim runner-up honors. Steven Shebester was fourth with Cody Brewer rallying from 12th to round out the top five.

The feature event was quickly red-flagged after one lap when Michelle Decker clipped an infield tire in turn two and flipped. With minimal damage, Decker returned to action.

The POWRi West Midget series moves on to I-30 Speedway in Little Rock, AR, tonight with racing action set to go green at 7:30 p.m.