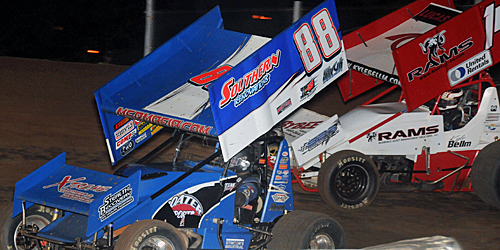 After last year’s edition fell victim to Mother Nature, the STN will be back in strong fashion with a $15,000 winner’s share up for grabs at the prestigious event set for November 2-5 in Little Rock, AR, with a minimum of $2,000 just to start the November 5 STN championship finale.

And, in a leap year with schedules jumbled all about, the shift to the first weekend of November should prove advantageous for the storied Short Track Nationals.

All Stars are done two weeks previous at Atomic and World of Outlaws wrap up with World Finals one week earlier at Charlotte. And with an idle week on the ASCS schedule, all winged Sprint Car roads should ultimately lead to Little Rock for Short Track Nationals festivities.

An open weekend this time could easily push the count back to the triple digit range last enjoyed in 2013 when 105 cars flocked to the high-banked ¼-mile for a shot at some serious loot.

More than $73,000 will be doled out in the November 5 Short Track Nationals 40-lap championship feature alone with in excess of $100,000 to be distributed over the course of the weekend.

Aside from 2001 STN champion Jason Sides topping the World of Outlaws at I-30 Speedway in April, veteran STN contender and 1998 champion Tim Crawley has been hard to stop atop the ¼-mile clay oval this season.

The only one to put the brakes on Crawley this year in 360-ci competition at I-30 has been Andy McElhannon, who topped the initial event of the season in March and then put a halt to Crawley’s four-race win streak the last time out on September 3.

Another STN tuneup is on the slate for this Saturday night with a $4,646 winner’s share up for grabs at the Ralph Henson Memorial.

STN entries have already started rolling in, with entry forms for the event available at http://www.i-30speedway.com/flyers/2016%20STN%20Flyer.pdf. Entries received by October 26 just $150, with entries after that at $250.