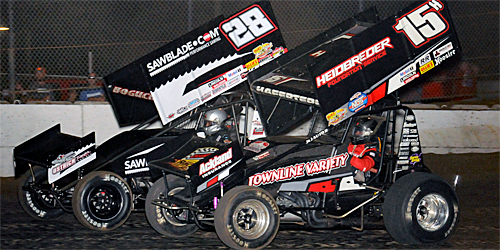 Be sure to get your tickets for the annual excursion to Arkansas for the prestigious $10,041-to-win Sprint Car event.

Advance tickets for the Friday and Saturday portion are just $40 if paying by cash or $42 using credit/debit card.  Only two-day tickets will be sold in advance and at a discount.  All children under 12 are admitted free courtesy of Hog Wild Janitorial Services LLC on Friday night and Howard Moore Racing on Saturday night.

All tickets are general admission only.  Pit passes will not be sold in advance.

The Entry Info:  Entry forms available at https://i-30speedway.com/wp-content/uploads/2020/06/2020-STN.pdf. Entry is just $100 and includes driver pit pass for Friday and Saturday if submitted by September 27.  Entries submitted after September 27 does not include driver pit pass.

While there will be no lock-ins from Friday’s $2,500-to-win preliminary, the top two drivers in combined passing/finishing points from Friday and Saturday heats and qualifiers that doesn’t race into the Saturday feature will be awarded the 19th and 20th starting positions in the Saturday night STN championship finale.  The 21st starting position is reserved for the 2020 I-30 Speedway track champion if needed.

The Tickets:  Advance two-day tickets are $40 plus a $2 processing fee if paying by credit/debit card.

Day of show prices are $20 on Friday and $28 on Saturday plus a $2 processing fee per ticket if paying by credit/debit card.