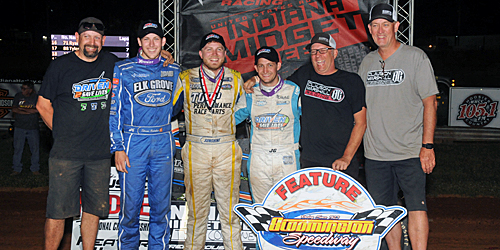 The Wheatley Chronicles – Volume V, No. 25

Lonnie Wheatley, BLOOMINGTON, Ind. (June 9, 2017) – “I hate this place, it hasn’t always done me right,” Tyler Courtney said as he climbed from his winning mount on Friday night at Bloomington Speedway.

It’s a sentiment that may be changing after “Sunshine” picked off his second USAC Indiana Midget Week win through four rounds of action, leading a Clauson-Marshall Racing sweep of the podium in the process with Justin Grant and Shane Golobic following in his wake as the checks flew on the 30-lapper.

Podium sweeps aren’t necessarily unheard of in USAC National Midget circles.  But when news breaks of a sweep, past results suggests the likelihood of a Keith Kunz Racing sweep.  It most recently happened last October 8 when KKR shoes Tanner Thorson, Carson Macedo and Spencer Bayston led the way at Granite City, IL.

There’s a new dog on the block though, and the rapid ascension of the Clauson-Marshall Racing team is one to be reckoned with.

He wasted no time diving in for a second serving.

For the second night in a row, Courtney had to transfer through “B” Main action.  This time though, he wasn’t mired in the 20th starting position, a hole from which he dug all the way out of up to third just 24 hours earlier at Lincoln Park Speedway.

Starting seventh made a world of difference, and Courtney cashed in.

“I made it a little harder on myself than I should have,” Courtney said.  “But running that ‘B’ actually helped some, I knew what the track was doing and that paid off.”

It all happened in the blink or two of an eye, with the non-stop 30-lapper running off in record fashion of just under seven minutes at 6:57.95.

Pole starter Jerry Coons, Jr., outgunned two-time IMW winner of this week Michael Pickens for the early lead and paced the field over half the way before being enveloped in a CMR swarm.

Working a couple car-widths off the bottom, Courtney’s surge towards the front began after a dozen laps.  He was soon up to second and then rallied past Coons, Jr., for the lead on the 18th lap.

“Sunshine” worked with precision through traffic over the closing rounds, gradually slipping away to secure the $3,000 payday and move back up to fourth in Indiana Midget Week points after Wednesday night powerplant meltdown handicapped title chances.  But with a second win, only 37 points separates Courtney from Pickens with the duo Brady Bacon and Golobic in between.

Grant and Golobic, who started side-by-side in round two, rallied past Coons, Jr., in the final rounds to capture second and third, respectively, with Coons, Jr., settling for fourth and quick timer Chad Boat rounding out the top five.

Qualifying Moments:  The third car to hit the clocks, Boat set the standard with the final car out (Pickens) timing in fifth-quick; Brenden Bright lost an engine in hot laps and Brent Beauchamp never got his ride up to full song; Zach Daum did all but flip in turns one and two on his opening lap before salvaging a time that ranked seventh on the second go-round.

Heat Moments:  While Bayston checked out over the latter half of the first heat, second-running Marcham faded late and opened the door for Gage Walker to take the fourth and final transfer by just edging Abreu at the line; Michael Koontz got on his side in turn four midway through heat two with the bottom feeders Coons, Jr., and Bacon ultimately edging rim-riders Alex Bright and Thorson for the top two positions; Monstrous sliders were the name of the game in heat three, first between Justin Grant and Daum for third and then Grant and Darland for the same positions as Kunz shoes Carrick and Holly Shelton slipped away; Fourth-quick timer Golobic needed just half the race to work from sixth to the lead while Davey Ray edged Kyle Jones and Tyler Nelson in a wild battle for the final transfer.

Best Supporting Role:  Jeff Bland, Jr., gave it a run, but after contact between he and Brady Short opened the door for an opportunistic Jordan Kinser it was Short turning it up a couple notches to rally into the lead with the white flag in sight to take Sprint Car honors.

“A” Main Cautions:  None

“A” Main Hard Charger:  Tyler Courtney landed Hard Charger honors for a second straight night, this time with the rally from seventh to victory lane.