Tatnell on Top at Mount Gambier 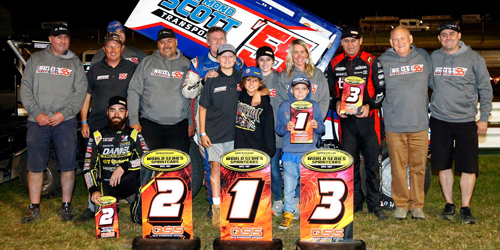 Two seasons and twenty-seven rounds have elapsed since Tatnell’s last World Series Victory, and with his return as a contracted driver for the first time since that win, the nine-time series champion’s campaign for a tenth win is in full swing.

“This win couldn’t have happened at a better place for the Ray Scott Transport team in their hometown,” Tatnell said. “This is their first World Series win and I’m just rapt to have been able to get it for them, especially here at Mount Gambier. Ray Scott was a big fan of my dad and he’s all about family, so to do this with my family here for a family-based team is just awesome.”

Tatnell’s campaign began by qualifying a conservative 14th out of the 39 cars, however a second and a sixth in the heat races was enough to qualify him for the shootouts, where he continued to move forward to qualify fourth for the main event behind Revolution Racegear Quicktime winner Jock Goodyer, James McFadden and Brock Hallett.

Kerry Madsen had qualified third in time trials, however a tangle with Rusty Hickman in his second heat sent the Krikke Motorsport #W2 back to the pits for repair, only to miss the shootout and be relegated to start from position six.

Jock Goodyer looked unstoppable from the start of the 35-lap main event, instantly gapping the field with Tatnell promptly assuming the second spot ahead of McFadden and Madsen.

A turn three incident involving Glen Sutherland, Ricky Maiolo and Jye O’Keeffe sadly reduced the field to 17 after just one lap, and on the restart, Goodyer again pulled away from the field and was potentially unpassable on a very quick race surface.

However, a second incident in turn three between Peter Doukas, Matt Egel and Lucas Wolfe occurred on lap three just ahead of the fast approaching Goodyer, leaving the leader with no option but to plough through the middle of the stranded cars and terminate his crusade for a maiden World Series win.

With Tatnell now in the box seat, McFadden made some hearty attempts at stealing the lead, however the #V55 had dialled in some exceptional corner exit speed at both ends of the oval, making it impossible for McFadden and Madsen to advance any higher on the podium, leaving Tatnell to cruise home for his sixth World Series win at Mount Gambier and his 77th victory overall.

Meanwhile Cory Eliason and Dave Murcott were in staggering form, with Eliason piloting the Diamond Bay Motorsport #W26 from 16th to 4th and Murcott claiming the American Racer Hard Charger Award advancing from 20th to 7th in the Mainline Dynalog/Drysdale Chaff Mills #V88.

Kerry Madsen retains his lead of the series and Speedweek on 699 points, ahead of Brock Hallett who claimed fifth to tally 684 points and Tatnell on 673. Cory Eliason is still in touch despite a tough night on 670 and four time champion James McFadden on 610. Lucas Wolfe and Jock Goodyer are ironically locked on 512 points for the Rookie of the Year honours while reigning champion Steven Lines is holding on to 8th on 510 points.

The series returns to Warrnambool’s Sungold Stadium tonight for round three before heading to Avalon the following day, and then returning to Warrnambool on New Years Day.