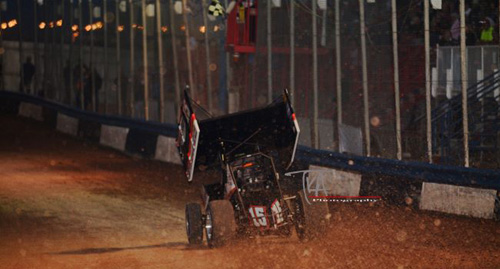 The Wheatley Chronicles – Volume III, No. 13

Lonnie Wheatley, TULSA, Okla. (March 12, 2015) – Wondering where to catch the best Sprint Car racing action this weekend? Following is a listing of this weekend’s action to figure out your best bets, just check your weather accordingly.

Highlighting this weekend’s slate of events is a World of Outlaws double at Tulare’s Thunderbowl Raceway, as the WoO guns launch an 11-race California swing that encompasses the next six weekends. The pair of events also serves as the opening pair of points races in the King of the West Sprint Cars title pursuit.

The WoO shoes are joined on both nights by the wingless aces of the USAC West Coast Sprint Cars with some Racesaver 305s scheduled to round out Saturday night’s card.

Elsewehere, Lincoln Speedway will try for the fourth time to kick things off in Central Pennsylvania with the Icebreaker 30, though weather may come into factor once again.

A variety of ASCS Regional races dot the winged 360 weekend including a scheduled Red River double at West Siloam Springs, OK, the Gulf South opener at Battleground on Saturday and Southwest action at Canyon Speedway Park. Other notable 360 action includes the $2,000-to-win Gold Rush at Marysville, Top Gun at Ocala and a Southern Outlaw Sprints double dip in Alabama.

A mix of 305 action is offered up as well, with a $1,000-to-win makeup feature a part of Bronco Raceway Park’s double features along with Cotton Bowl Speedway hosting the first Non-Wing Elite 305 event and the season opener at Kennedale Speedway Park.