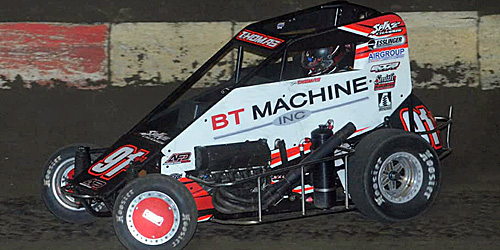 The Wheatley Chronicles – Volume V, No. 18

Lonnie Wheatley, TULSA, Okla. (May 22, 2017) – While Zach Daum has slipped by Christopher Bell for the top spot in the latest www.midgetmadness.com Midget Power Rankings, it’s Tyler Thomas that has made a big move into the top five.

While denied victory lane thus far, three runner-up finishes over the four most recent POWRi events has been just the push Daum needed to edge ahead of Bell for the top ranking by just six points.

Charging to victory lane in three of those same four POWRi events earlier in May propelled Oklahoma shoe Thomas from 22nd all the way up to fifth.

Rounding out the current top ten are Justin Grant, Tanner Thorson, Ronnie Gardner, Ryan Robinson and Shane Golobic.  Thorson and Robinson run the Kunz total ranked among the top ten to four with Grant and Golobic giving CMR three among the top ten.

With Jake Swanson one spot out of the top ten in eleventh, the West Coast based Six8 Motorsports team has two drivers ranked among the top 11 with Gardner eighth after picking off his second USAC West Coast Midget win of the season in recent action at Ventura.

This weekend’s action consists of a POWRi West double at Airport Raceway in Garden City, KS, and a Montpelier (IN) round of competition as well.  Then it picks up with POWRi Midget Week firing off on May 31 with the first of five nights and then six nights of USAC Midget Week on June 6-11.

The current top 25 in www.midgetmadness.com Midget Power Rankings through May 20…

Number of Drivers to Earn Points: 144